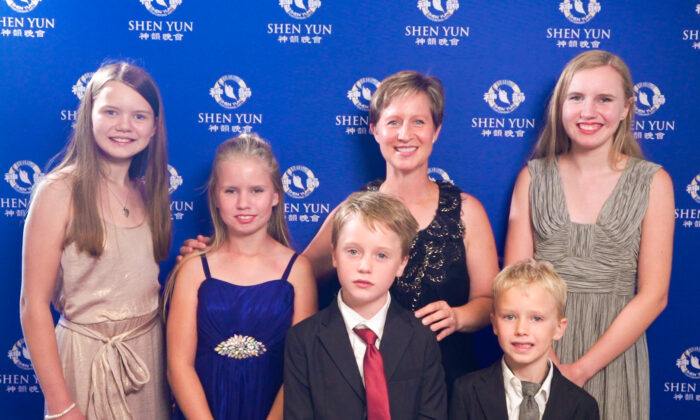 GREELEY, Colo.—Shen Yun Performing Arts is always a great treat for families. On the occasion of Shen Yun’s performance in Greeley, Colorado, on Sunday evening, Gina Johnson,  a symphony oboist attended with her family.

Johnson—who has played in both the Cheyenne and Fort Collins Symphony Orchestras—described Shen Yun’s orchestra as “phenomenal.”

“I thought it was extremely well balanced. Some instruments were very familiar, and it was neat to hear the Chinese instruments that were featured,” she said.

Shen Yun’s unique orchestra blends the best of two worlds—the sounds of classical western instruments as the base accentuating the distinctive sounds of traditional Chinese instruments such as the erhu or pipa.

“They were all excellent. [The erhu] was perfectly in tune all the time, which is not easy to do on string instruments. She played beautifully,” Johnson said.

The 4,000-year-old erhu is a Chinese violin that is said to mimic the sound of human voices.

I thought it was a very even combination of Eastern and Western [instrumental sounds]. Both sides of the world were represented well in the orchestra.
— Gina Johnson, a symphony oboist

“I thought it was a very even combination of Eastern and Western [instrumental sounds]. Both sides of the world were represented well in the orchestra. [It was] very professional all the way around, and magical,” she said.

Johnson was also impressed by Shen Yun’s dancers who depict stories that carry messages from China’s past civilizations as well as cultural dances from its many ethnic groups.

The versatility of the dancers was impressive, she said.

She summed up her evening as a “beautiful cultural experience.”

“The stories are very well told …[one needs to] step into somebody else’s culture to understand the values that go along with that culture,” she said.

Dot Diemer, a speech and language pathologist, and Bryce Cox, a software engineer, accompanied Johnson and her family to see Shen Yun. They purchased tickets last year before the pandemic forced the closure of most theatres in the U.S.

“It was absolutely worth [the wait],” said Diemer. “I think everybody should see it. It was beautiful.”

Cox said that the performance was extremely well done. “The costumes, the music, the dance, everything was outstanding,” he said.

“Just perfect,” Cox said, adding that he enjoyed the story and its sense of spirituality on “the divinity of human nature.”

“[That] message was important to me,” he said.

Shen Yun showcases 5,000 years of Chinese traditions through classical and folk dance. Chinese culture is based on spirituality that has largely been lost since the beginning of the rule of the Chinese Communist Party over 70 years ago.