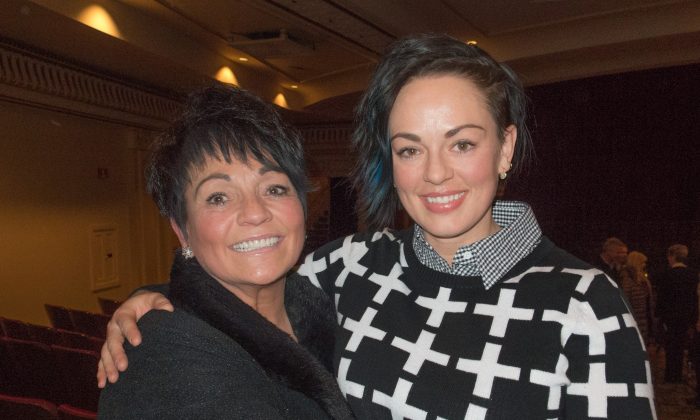 “We loved it. It was fabulous,” said Ms. Knowlton, an administrative assistant in the Mayor’s office. She knew her daughter, Ms. Stoker, a dancer, aerialist and gymnast would enjoy the dancing.

Ms. Stoker, founder and Director of Defying Gravity Utah, was a lifelong gymnast and dancer before becoming an aerialist. Her career has taken her around the country and across the ocean as a principal aerialist at Walt Disney World, and as a freelance aerial artist and dancer for AntiGravity Entertainment, Universal Studios, Odyssey Dance Theatre, and ICON Health & Fitness, among others.

These long flowing sleeves. They were just so beautiful.
— Ramsi Stoker

“As a dancer, I was watching with such a technical eye, and I was so impressed with just the beauty and the grace with which they managed their costumes,” she said. “These long flowing sleeves. They were just so beautiful.”

Shen Yun is based in New York and has classical Chinese dance at its heart. But Shen Yun is so much more, incorporating originally designed handmade costumes, a blended orchestra of classical Western and traditional Chinese instruments, state-of-the-art animated digital backdrops, encompassing mini dramas across thousands of years of Chinese culture and history to deliver a complete theatrical experience, according to its website.

The ladies loved every part. Ms. Stoker said, “The music was so beautiful. Instruments I don’t hear very often. The whole production was just really moving.”

Ms. Knowlton was moved to tears at many times throughout the performance.

“What touched me was the desire of every soul to have freedom to believe and to express and to say and do what they want to do,” she said. “And that was what was beautiful, along with all the beautiful colors and the scenery and the technology with the dance and the music, how it all blended together. It was fabulous.”

For thousands of years divine culture was the heart of China, but the communist party with its atheist philosophy has tried to destroy traditional Chinese values that centered on the idea of harmony between heaven and earth.

According to Shen Yun’s website, “Humanity’s treasure was nearly lost, but through breathtaking music and dance, Shen Yun is bringing back this glorious culture.”

The ladies saw a message of freedom to believe and express, and to keep one’s heritage, history and traditions. Ms. Knowlton believes in a Creator and God, a supreme being who is essential to everyone’s lives.

“I’m so impressed that they’re able to keep those traditions alive and to share with all of us,” Ms. Knowlton said. “They’re doing that, so that’s beautiful.”

The ladies felt it is so important to be able to express and stand up for one’s beliefs and for truth.

Ms. Stoker added, “It was spectacular!”