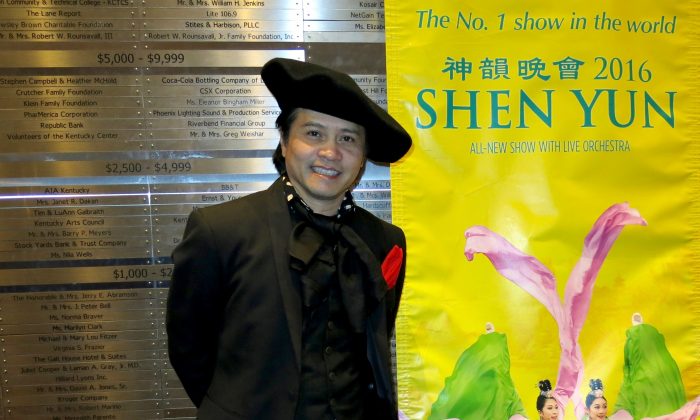 Apollo Bacala enjoyed the detailed work in Shen Yun. He saw it at the Kentucky Center for the Performing Arts on Feb. 9, 2016. (Charlie Lu/Epoch Times)

LOUISVILLE, Ky.—In the past, Apollo Bacala toured as a dancer with a regional company that brought the Spanish culture to schools and universities, so he could relate to Shen Yun Performing Art’s mission to travel the world and restore the traditional culture of China’s 5,000 year civilization.

New York-based Shen Yun began in 2006 and has grown over the years to boast four companies touring over 100 cities annually, yet it maintains its mission to share the rich aesthetics of its history with the world.

Mr. Bacala saw Shen Yun at the Kentucky Center for the Performing Arts on Feb. 9, but he’d been eager to see the performance for three years. He now wishes he could have seen the earlier performances, since each year Shen Yun creates a new performance from scratch.

Mr. Bacala, a dancer-turned-actor, has appeared in blockbusters like “Batman v Superman: Dawn of Justice” and “Star Trek Versus Batman.” But he started as a dancer of Spanish classic, flamenco, Philippine folklore dance, and classical ballet, and danced professionally for a decade.

The cultural aspect of Shen Yun came through clearly to Mr. Bacala, who said that both the essence of Chinese dance and the character of the Chinese people came across.

“A+—it was phenomenal. I mean, it was breathtaking,” was the dancer’s assessment of Shen Yun’s classical Chinese dance.

Considering all the aspects of the performance, from the dance to the costuming, he could not find “any other words besides beautiful and phenomenal.”

Classical Chinese dance, emerged as a complete system of dance only after passing through several dynasties, and today embodies traditional aesthetic principles that are unique to the Chinese culture.

One of these unique points is that it is an extremely expressive dance form. For this reason, Shen Yun uses classical Chinese dance to tell stories, which give an overall sense of China’s cultural heritage.

Each dancer brings nuanced inner meaning to whatever character he or she portrays.

Mr. Bacala, who was keenly watching with binoculars, noticed the character development based on the movements. As an example, he described how dancers playing military characters moved like soldiers and they were clearly delineated from other characters.

Classical Chinese dance is also known for its gracefulness and unique body positions and movements which follow circular patterns.

A third essential component of classical Chinese dance is its aerial and tumbling techniques, many which stem from martial arts. The dance form evolved alongside from martial arts, which was interesting to Christopher Diaz, who accompanied Mr. Bacala to the performance.

The focus in his studies has been on stance work and breathing in for every movement. He noticed that all the Shen Yun dancers were breathing in and out together.

In fact, as Shen Yun choreographers explain, breathing is part of the choreography and all dancers are taught when to breathe as they are learning the steps.

“Having practiced martial arts up to this point, especially focusing on one that has a lot of footwork involved, I can see a lot of complexity in it. I can see how difficult it is to perform, and the attention to detail that goes into it,” he said.

As far as detail goes, Mr. Bacala even commented on the costuming’s details: “The stitching. I mean, everything was on point.”

“It’s just totally phenomenal, and it’s totally worth the time attending, watching it,” he said.