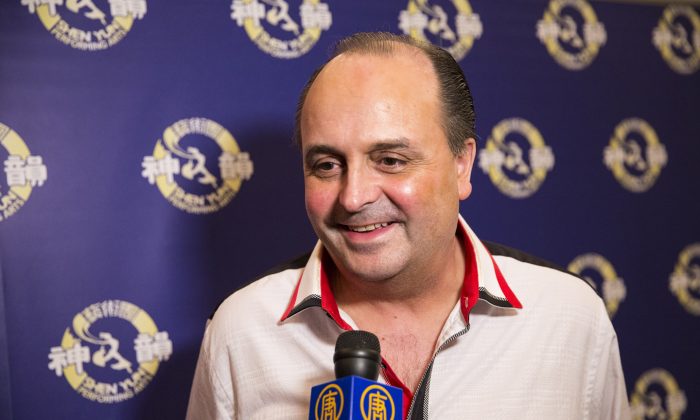 OTTAWA, Canada—Canadian producer Stephan Klovan skated in the Ice Capades, danced on Broadway, and launched the career of singer Alanis Morisette, but even he gets wiped out from the holidays.

The stress of Christmas and New Year’s got to him this year, but after watching Shen Yun Performing Arts on Saturday night, he felt thoroughly refreshed.

“I’m producing a show in a month and this has just energized me,” he said. “This has just given me the capacity to go ahead.”

“It was a joy to watch these performers because they’re so fantastic,” said Mr. Klovan, who is currently running the entertainment line-up of the Canadian Tulip Festival.

Shen Yun, the renowned Chinese dance and music company, is in the Canadian capital for the weekend, performing for packed audiences at the National Arts Center.

“It’s exquisite! It’s perfection. We were in the front row and just every movement was fantastic. Their facial expressions, the costuming, the lighting, the choreography—the music was just a phenomenal experience.

“It’s a fantastic way to start off the New Year. I feel rejuvenated and filled with love and joy from watching the show. You can feel the energy from all the performers,” he said.

Every aspect of the performance impressed him.

“The details were fantastic, just even down to their fingers, their eyes, their everything. The costuming, the colour combinations are things that you would never normally think go together but it’s fantastic …”

New York based Shen Yun features performances of classical Chinese dance, one of the most comprehensive dance systems in the world, depicting stories from traditional Chinese culture, from a repertoire of 5,000 years of civilization.

Mr. Klovan was impressed by their simplicity—being both captivating and easy to follow.

“There was a little boy sitting next to me and he just loved it. He wasn’t bored at all and that’s special where it pleases people of all ages, all cultures. It translates a very powerful message that comes in,” he said.

“I think that all the dancers and all the performers are like ambassadors for China and the message and the beauty of everything that’s good from the country.”

Established in 2006 by overseas Chinese artists, Shen Yun aims to restore the divinely inspired heritage of China that was almost lost under communist regime that has ruled the country for the past six decades.

Mr. Klovan said he felt the inner meaning of the performance.

“The message was peace, joy, love, harmony, how to live your life on earth so that you can fulfill your life and go to heaven. It was an eternal message that’s very powerful. And you need to have it reinforced, and this show does so in a very gentle and beautiful way. And it doesn’t kind of force the issue but you just feel it. You feel so good and it’s very peaceful and loving,” he said.

Describing his feeling at hearing the music, he said “it’s like a little piece of heaven… how often are you going to hear such perfect music and such perfect everything?

“My hats off to the producers and the directors for putting such a lovely show together and taking this message across Canada and the world.

With reporting by NTD Television and Madalina Hubert