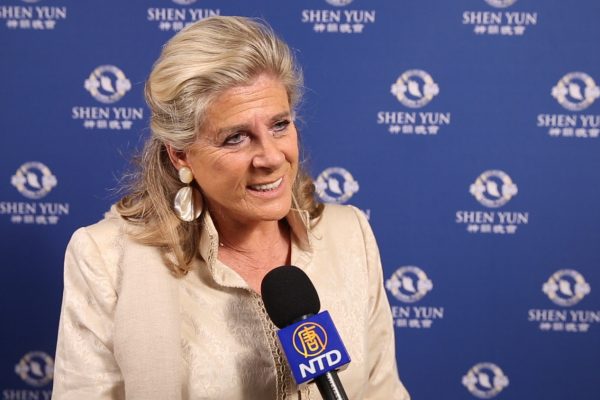 Princess Lea of Belgium at the first performance of Shen Yun at the Bâtiment des Forces Motrices on Feb. 28, 2019. (NTD Television)

GENEVA—The Bâtiment des Forces Motrices (BFM) has been resonating with the sounds of Chinese classical music. The famous classical Chinese dance and music company Shen Yun Performing Arts was back in Switzerland with its new program.

This year, Shen Yun’s growing success has reached the highest social levels, including the prestigious “crowned heads” of Europe. After Prince Jean d’Orléans in France, it was Princess Léa of Belgium who came to discover the 5,000 years of traditional Chinese culture.

Léa of Belgium, born Wohlman, is the widow of Alexander of Belgium, brother of the former King Albert II of Belgium and uncle of the current King Philip of Belgium. This elegant woman said she was “impressed by Shen Yun’s artists.”

She was full of praise for the performers after seeing the New York-based company.

“I find it absolutely impressive in terms of beauty, aesthetics, agility, of course, talent and speed!” said Léa of Belgium.

“We are carried away by the rhythm of this show from the beginning,” she said.

This was the first time she had seen classical Chinese dance, and she said she found it impressive and innovative.

Classical Chinese dance, which dates back thousands of years, is one of the most complete dance systems in the world. Indeed, it has been enriched over the successive dynasties in China, developing postures and acrobatic techniques that later inspired some martial arts or circus arts.

But what particularly characterizes classical Chinese classical dance is the yun, or “bearing.” It could be translated as the soul or the expression of the dancer’s inner spirit.

As Shen Yun explains: “Bearing is formed by the combination of something that would look like cultural DNA or an ethnic flavor that the Chinese have in their blood, it is the legacy of 5,000 years of Chinese civilization. Bearing emphasizes the inner spirit, breath, intention, personal aura and deep emotional expression. The quintessence is that the mind directs the form, so that the form is imbued with the mind.”

Princess Léa was sensitive to this spirituality that so animated the Shen Yun artists.

“We have this impression, indeed, that artists are extremely imbued with what they do, and with spiritual emotion,” she said.

She added that she felt “a lot of positive energy,” and “I hope we will keep it throughout the coming weeks!