Prince Jean D’Orléans: Shen Yun Invites Us to ‘Escape into another world full of color, poetry, and humor’ 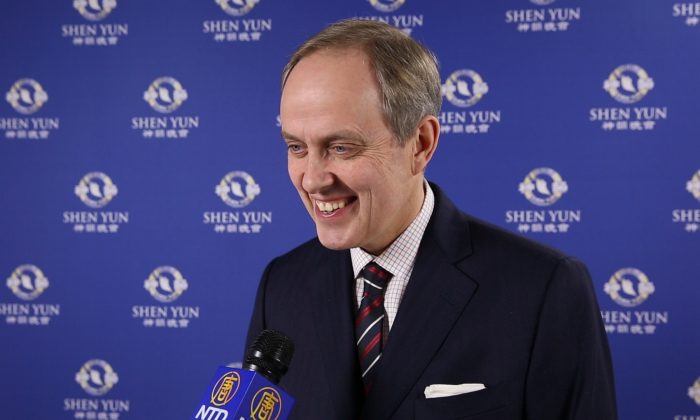 Heir to the kings of France, Prince Jean d'Orléans attended the first performance of the Shen Yun Performing Arts company in Paris, France, on Jan. 16, 2019 at the Palais des Congrès. (NTD Television)

PARIS—Shen Yun Performing Arts’s first performance of the year in France was sold out.

On Wednesday, Jan. 16, the Palais des Congrès hosted the very first performance in France of the 2019 season of the largest classical Chinese dance and music company.

Among the audience was Prince Jean d’Orléans, who was experiencing the beauty of the performance and the revival of 5,000 years of Chinese civilization, for the first time.

He said the performance gave the feeling of “escaping into another world full of color, poetry, and humor.”

Prince Jean d’Orléans, Duke of Vendome, is the second son of Prince Henri, the Count of Paris and Duke of France, and Duchess Marie Therese of Württemberg. He is first in line to succeed the French Throne. The descendant of Louis XIII was struck by “the technique and vibrancy of classical Chinese dance,” a form he was not familiar with. He also greatly appreciated the beauty of the dancers’ costumes.

According to the heir of the house of Orléans, Shen Yun offers a moment of escape to its audience, but it is also a reminder of the importance of “tradition and culture” in a world that the prince considers “too materialistic.”

“I think it’s very good, we need this today. We’re too materialistic, so we need to escape a little. We need poetry and then we need this relationship, that’s it, with the sky, with the divine, and that’s it and everything we’ve seen there makes a bit of a connection between the two,” said Prince Jean d’Orléans. “And I think it’s important, man shouldn’t lose sight of where he comes from, and here we are, if you’re attached to someone who, you think they’ve had a creation, this is a divine being, I think it’s important for us to remember it.”

For the Prince d’Orléans who defines himself as both a “Christian prince and a French prince,”  Shen Yun makes the link with the divine and offers a window to Heaven.

“Man must not lose sight of where he comes from,” he said with emotion.

“When you don’t know what your past is, it’s hard to know where you’re going,” said Prince Jean d’Orléans. “And I think that in a world that doesn’t have a reference, tradition and culture are very important. And then when you have 5,000 years of culture, it’s even stronger.”

While he believes that the torments of everyday life can sometimes take precedence over the sanctity and poetry of life, he considers it “very precious” that “such a show can still be performed today.”

Shen Yun draws from myths and legends and lore, from the various ethnic minority groups across China, from the long line of dynasties in history, to tell stories of China through music and dance. It’s not a China most have had the opportunity to witness before, Prince Jean d’Orléans added.

Prince Jean d’Orléans said hopes to have another opportunity to attend a Shen Yun performance in the future, with his wife.