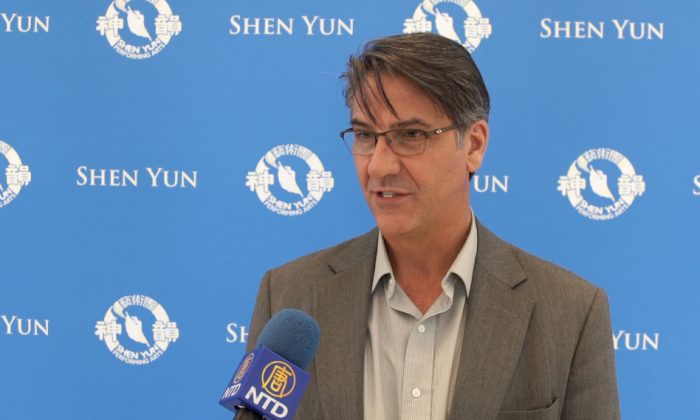 SALT LAKE CITY—It was the colorful costumes that caught the eye of the Mayor of Price City in Utah Michael Kourianos when the curtain first rose on the dancers of Shen Yun Performing Arts.

“The costumes are just out this world,” said Kourianos after attending the performance with his wife at George S. and Dolores Doré Eccles Theater in Salt Lake City, Utah on March 16.

“What I like about the performance is that it’s very tastefully done,” he added.

“The modest dress and the classical Chinese dance is just beautiful.”

“Every step, every thing is done very well.”

Shen Yun is a top classical Chinese dance company whose mission is to revive traditional Chinese culture through music and dance. With a program featuring dance vignettes, dance-based storytelling, and musical soloists, the New York-based company aims to transmit the essence of a civilization that was almost lost as a result of the communist destruction of Chinese culture in recent decades.

Indeed, through the performance Kourianos was able to pick up on some of the values and principles lying at the heart of traditional Chinese culture.

“Being virtuous … and modest,” he said. “Those are the things that stand out to me, and I love that.”

The mayor said the company’s devotion to preserving such traditions shined through the performance.

“You stand strongly for what you believe in and that is admired,” he said. “Because in this day and age, it’s going away, and especially the principles and values that you’re taught from a young age. You stand strong.”

In particular, Kourianos applauded Shen Yun’s perseverance in spite of the fact the company cannot perform in China.

“You feel strongly for what you believe and you’re willing to share that with everybody,” he said. “Because people don’t really realize that, and the freedom that we have here in America.”

The company is prohibited from performing in China because it contains stories depicting the persecution of Falun Gong practitioners by the Chinese communist regime.

Falun Gong is a spiritual practice comprising of meditation exercises and a set of teachings centered around the principles of Truthfulness, Compassion, and Tolerance. The practice was banned in 1999 by the communist regime, which launched a sweeping crackdown against adherents of the practice, many of whom have been imprisoned, tortured, or even killed.

Kourianos said the ingredient that makes Shen Yun rise above a mere piece of entertainment is the fact it’s showcasing an ancient culture that is said to be divinely inspired.

“I believe that. You can see that, you feel that,” the mayor said.

“And I guess that’s what I see about the performance. It intrigues you, and it gets your heart and your mind. That’s why it’s done very well.”

Watching the performance also led Kourianos through a range of emotions.

“But then again it makes you feel sad because of the persecution and everything that they’re experiencing, and it’s being experienced right now. That’s real, that’s sad.”

The mayor said he was keen to return to experience Shen Yun again next year, although he faced a dilemma.

“Next year … my wife wants to get up higher, I want to get closer,” he said.