President Sees ‘The Beauty of the Whole World’ in Shen Yun 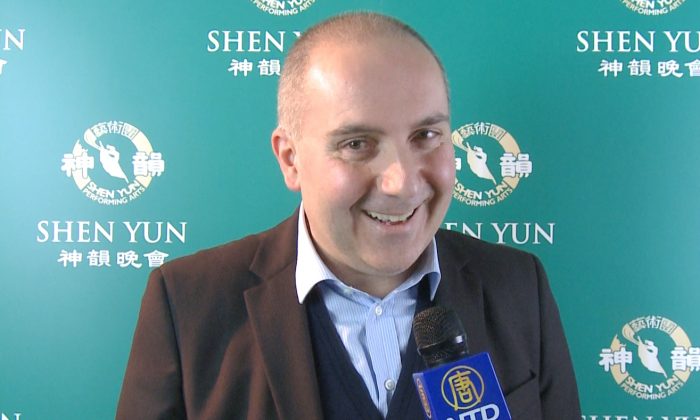 MILAN, Italy—Roberto Mirabile, president of La Caramella Buona, was very impressed by “the great mastery of these very great artists”, after watching the Shen Yun Performing Arts at the Teatro Degli Arcimboldi on March 21.

An admirer of the art and of the theater, who sees “at least forty shows a year in all Italian theaters”, Shen Yun was really a great surprise for Mr. Mirabile because it “brings us closer to a culture that obviously for us, Italians and Europeans, is far away … .”

Mr. Mirabile was amazed by colors, music, and dances. He said he really liked Chopsticks Dance of the Mongolian Ladies and was impressed with “an artistic and musical level … the rhythm of the sound, the mastery with which these girls can dance, and smile, because they always smile, these artists, and this is to remember.”

Roberto Mirabile said he was very impressed by the dance “that spreads the great message of tolerance: the evil of a regime that crushes you is defeated by compassion, goodness that can solve everything … .”

He was referring to the dance story, The Power of Compassion, which is based on true events, when Falun Gong meditators are suddenly attacked by communist police and severely beaten.

But when an officer hurts his knee during the attack, the Falun Gong practitioners stop trying to flee and help the officer. Moved by their compassion, the officer comes to regret his actions.

“This dance has shown us that the good must always win over evil, always,” he said.

Mr. Mirabile “especially liked the message of great humanity and brotherhood, of peace, and as one of the song says, of tolerance.”

He said that nowadays, “in a world where, unfortunately, selfishness and self-interest are dominant, this tolerance, this brotherhood is a message that Shen Yun launches to the whole world and as a spectator I can only be happy and content.

“[It] is something that fills my heart, he said. “I really thank these artists and … those who organized these evenings here in Milano in Italy.”

He expressed a wish that there should be more performances like Shen Yun, and said it was true that the art and the music can join all cultures and society and make all equal.

Mr. Mirabile said that in Shen Yun there is “the beauty of the whole world.”

This evening makes [us] understand how much we really need to know each other … if we knew more the cultures of other nations, of the other continents, I think we would have far fewer conflicts, fewer wars in this world … .”

Mr. Mirabile said he would recommend [Shen Yun] not only to all lovers of good art, good music, and good dancing but to all those people, as he put it, with arid hearts and feelings.

He further explained that after watching two hours of this performance, “perhaps they could soften and understand themselves in their selfishness, their malice, and how much they have lost in their life, and this is a great message of this great show … .”

With reporting by Nataly Teplitsky