Company President: ‘No Amount of Money Can Buy the Joy of Watching Shen Yun Perform’ 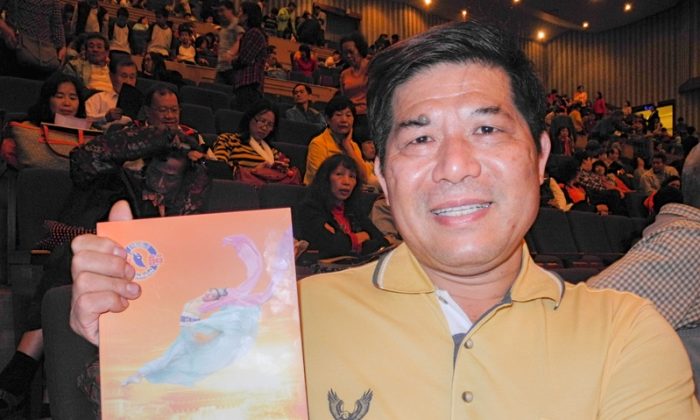 KAOHSIUNG, Taiwan—”After watching Shen Yun, I realize that no amount of money can buy the joy of watching Shen Yun perform,” said Yeh Chieh-Hsiang, president of Chi Hsiang Industrial Co. He made a special trip from northern Taiwan to the south just to see the performance. He was so touched and happy, with tears in his eyes, he said, “It opened a door to my heart.”

“There is an emotion bursting out from my heart,” Mr. Yeh wiped the tears off his face. “I can’t explain what it was. I was just very emotional and the tears kept rolling out.”

He then said, “I’ll just say that there is a divine power behind the performance.”

Shen Yun is a classical Chinese dance company based in New York. Its mission is to revive China’s traditional culture.

As principle dancer Jialing Chen explains in a blog on the Shen Yun website:

“China was once known as “The Celestial Empire” and “The Land of the Divine.” And Chinese mythology is filled with accounts of semi-divine beings coexisting with humans on Earth. … These deities are said to have left a rich culture of music, dance, and other arts.

Mr. Yeh said that an important part of Chinese culture is divine culture. He saw that in the entire program, Shen Yun used everything on the stage, including costumes, dancing and music, to fully express the deep connotation of Chinese culture.

“This is why it was able to touch deeply inside to my emotion,” said Mr. Yeh.

“Shen Yun inspires and allows me to feel the culture,” he said.

Mr. Yeh seldom had a chance to settle down due to his busy daily schedule and he believed that Shen Yun helped him find the pureness inside him.

“We are so busy pursuing material goods and ignore the wisdom our ancestors have passed down to us.”

When Mr. Yeh found that wisdom through Shen Yun, he was genuinely happy, “Like something just clicked and it made me so emotional and cry.”

Mr. Yeh explained what made him so uncontrollably emotional after watching Shen Yun. “I think it is the stage design and the artists’ exceptional performance that inspired my long-buried soul. Those artists are like angels bringing messages from heaven.”

Mr. Yeh encouraged people to watch Shen Yun live. “You have to be there and open your heart to it. This is the only way you can get to your own heart.”

Mr. Wu Yu-Chan is a Knight canonized by Pope John Paul II for the Roman Catholic Diocese of Kaohsiung. Deeply moved by the Shen Yun show last year, he and his wife attended the performance presented by Shen Yun Performing Arts New York Company at Kaohsiung Cultural Center on the evening of March 5, 2015 again.

He happily said that because they were amazed by Shen Yun’s peaceful atmosphere last year, they decided to see the performance along with their son this time.

After seeing Shen Yun, Mr. Wu said, “[Shen Yun] made a comprehensive presentation of the essence of our 5,000 years of Chinese culture.”

As to the program depicting the great deeds of those who act on their beliefs in the universal principles of truthfulness, compassion and forbearance in the face of the cruel persecution, he said, “That’s the highest level of compassion.”

One dance, The Power of Compassion, depicts Falun Gong practitioners, who live by the principles of truthfulness, compassion and forbearance, as they are beaten by Chinese police. Despite being beaten, the characters come to the aid of one of their oppressors who is hurt.

Mr. Wu added that many people talk about compassion, but it’s not easy to be really compassionate with others, not to mention being compassionate with those who are against you. He said that even those who perpetrated the persecution were moved by compassion, and eventually this policeman turned into a kind person. So it’s the highest level of compassion depicted here, and he was truly moved by the spirit of “Truthfulness, Compassion and Tolerance.”

He thus urged the general public to learn the spirit of “Truthfulness, Compassion and Tolerance,” and to transform the compassion felt for family members into the greater compassion that transcends the boundaries of races and nationalities. In this way we can forge more positive energy among people around us to dissolve hatred and violence.

He felt like he was in heaven when seeing Shen Yun, noting, “The entire show presented by Shen Yun is very special, and it’s really hard to come by. In addition to the artistic values presented by all the performers, we can feel the peacefulness on their faces. They are very peaceful.”

“These performers must have been supported by a kind of spiritual power for a long time, so that what they perform is different from shows performed by other troupes. With the excellent design of the digital backdrops, the overall presentation is just like the scene in heaven, which inspired us spiritually. Such a high class performance is not something that can be done by ordinary performing arts groups.”

Mr. Wu hoped that Shen Yun’s spirit can be promoted and grow, and he believes that the power resulting from “Truthfulness, Compassion and Tolerance” will eventually usher in some changes in the world, including China. “We should uphold compassion. As long as we are steadfast in such conviction, we can make a difference eventually,” Wu Yu-Chan concluded.