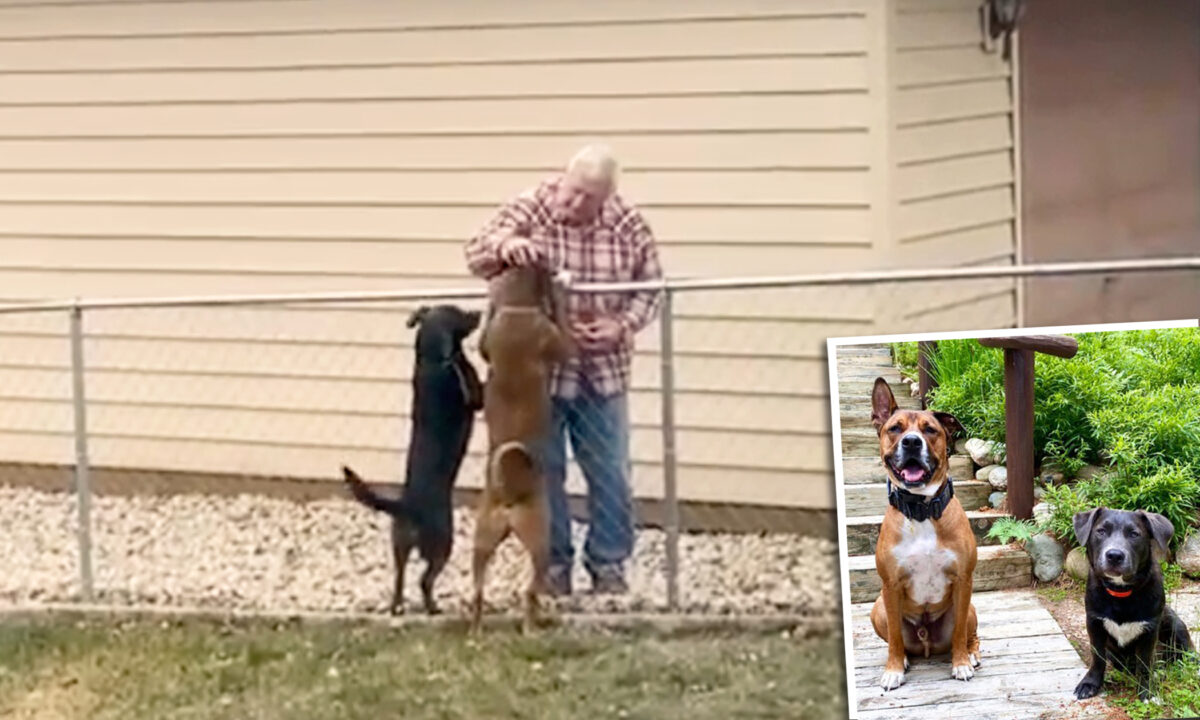 A Wisconsin police officer has revealed the heartwarming bond her two dogs share with her elderly neighbor, who often meets them across the fence, greets and gives them treats.

Officer Amanda West, 28, adopted now-5-year-old Kent, a pit bull/boxer/Rottweiler mix from Paddy’s Paws out of Fort Atkinson, Wisconsin, in 2016 when he was just 8 weeks old. She later adopted his buddy, now-2-year-old pit bull/husky/basset hound mix, Lex, from the same shelter in 2020.

Amanda, who grew up in the northwest suburbs of Chicago, moved in with her fiancé, Jesse, in 2020, where she and the dogs were first introduced to his elderly neighbor Joe and his wife, Lucy.

“My fiancé, Jesse, has been living next to Joe since 2013 when Jesse bought the house,” Amanda told The Epoch Times.

Initially, Kent and Lex, Amanda says, were not familiar with Joe. However, now, they bark until Joe gives them attention and their daily dog biscuits or carrots. The dogs have grown so fond of their elderly neighbor that, “when they are outside and know that Joe is home, they will pace back and forth along the fence.”

When not pacing or barking, the dogs will sit or lay down near Joe’s side of the fence and watch the side door, waiting for him to emerge. Joe’s appearance prompts furious tail-wagging, and the elderly neighbor always responds with pets and treats, sometimes sling-shooting them across the lawn for the dogs to fetch.

Kent and Lex also seem to understand that if there isn’t a vehicle in the driveway, then Joe isn’t home, Amanda explained. Still, they wait patiently, hoping their favorite neighbor will come.

“If they are brought inside and let outside again, they will run straight to the side of the fence Joe’s house is on to see if he has returned home,” Amanda added.

In a sweet video with over 375,000 likes on TikTok, Amanda has captured Joe working his magic with her happy pups in their backyard.

Joe is “like grandpa for the dogs in the neighborhood,” Amanda said in a video filmed for GeoBeats Animals. The friendly neighbor, she said, is surrounded by dogs on both sides of his house.

Meanwhile, Joe believes that he’s “just trying to make the world a better place” by loving his neighbors.

According to Amanda, she knew that Joe—who was always ready to lend tools to Jesse or gift vegetables and sunflowers from his garden—was a kind soul right from the start.

“[We] were recently sick and he checked on us multiple times,” she told The Epoch Times. “I asked Joe if he could run to the store and grab us some more medicine … he grabbed us the medicine, along with orange juice and ice cream.”

Luckily, the dogs’ love for Joe is matched by their love for Amanda and Jesse. An officer working night shifts, Amanda originally adopted Lex to keep Kent distracted while she slept, but now says that the bond she shares with both dogs is nothing short of inseparable.

“They are always so happy to see me, even if I am gone for five minutes,” she said. “They are the same way with my fiancé. I had Kent before I met Jesse, and they instantly became best buddies; any time Jesse would come over, it was like I didn’t exist.”

Kent, named after Clark Kent of “Superman” and Lex, named after his nemesis, Lex Luther, have as many similarities as differences, said Amanda. Both of them love walks, playing rough, swimming, and fetch. Describing their personalities further, Amanda said that Kent “loves to hear himself bark,” and Lex is a bona fide cuddle monster.

Amanda added: “Kent is a gentle giant and loves anyone he meets right away; I don’t think he has a mean bone in his body, which cracks me up, since he is categorized as an ‘aggressive breed.’

“[Lex] always wants to be close to the people he loves, and will literally lay right on top of your head if he can. He tries to act like he’s a tough guy, but in reality, he is afraid of anything he isn’t familiar with.”

Together, the two share an incredible bond with each other.

“Lex is obsessed with Kent and whatever he is doing,” Amanda said. “He is lost without Kent.”