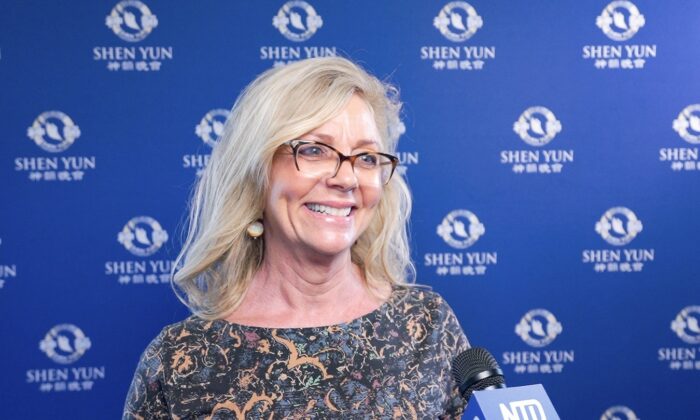 BERKELEY, Calif.—Roxanna Cohen, a physical therapist and owner of a Pilates studio in Grass Valley, California, teaches young dancers about body awareness. On Feb. 2, 2020, she had an opportunity to see Shen Yun Performing Arts at Berkeley’s Zellerbach Hall.

She praised the performance of classical Chinese dance, the ancient art form that Shen Yun is renowned for.

“The athleticism of this is stunning,” Cohen said. “It is absolutely stunning, and the gracefulness of it is amazing also. I love watching men dance, and what I really love the most is how strong and powerful they are, but yet they’re so graceful, and so the grace comes through even with the men. But even though it’s graceful, it’s very masculine. And the women are stunning as well. They’re just absolutely stunning.”

“I looked at some of the video online … of [Shen Yun dancers] practicing, and even that is just stunning to look at,” Cohen said. “I work with young dancers, with high school kids, and so we’re teaching them a lot about body awareness and about precision and being connected to other people within what they’re doing. And to see how it’s executed, it’s stunning. It’s really stunning.”

Mind and Body Aspect of Dancing

The company’s website explains: “They meditate together, study teachings together, and strive to live by the principles of truth, compassion, and tolerance. Their self-discipline is remarkable, and they believe that cultivating the heart is the way to create art that is beautifully sublime.”

Cohen is familiar with the idea that the mind is an important part of dancing.

“A very interesting component of being a dancer is that you do need to have complete control of your body, and it’s your mind that is doing it,” she said. “In order to be able to do that, you have to have such an awareness of where your body is in space and how your body feels, and the proprioception of where you are, and your relationship to other people, especially onstage; and the timing with the music and the feel of it, and how it’s really not mechanical, and how you can see how it comes from within.”

“I think that is so awesome that they’re doing that. It’s beautiful. It’s such a shame that it’s lost and it’s not passed down [by anyone else], but so wonderful that this group is able to do that. It’s very exciting,” she said.

Ancient Chinese culture placed great importance on reverence for the divine, but this spiritual aspect has nearly been destroyed in modern times by the officially atheist Chinese communist regime. Shen Yun aims to bring this divinely inspired culture back to life on stage.

Cohen appreciated the divine aspect of the performance and the traditional values she saw portrayed in Shen Yun.

She said she felt awe while watching Shen Yun.

“[It makes] me emotional, just even thinking about it. I think that the discipline that comes through and the fact that [the artists] are trying to express the morality of it, and what’s right and what’s wrong—we need more of it,” she said.

Because of the Chinese communist regime’s oppression of spirituality and tradition, Shen Yun cannot perform in China today for fear of persecution. Cohen thinks it would be wonderful if Shen Yun could perform there.

She thinks other people “should definitely come see this show.”

“It’s visually beautiful. It’s culturally important. It’s totally worth it to take the time to come see it,” she said.