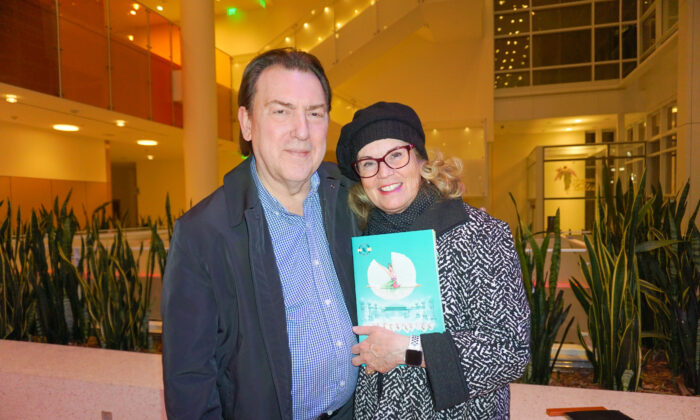 SALT LAKE CITY—Utah’s Rick Baldassin is world-renowned among pianists, symphony directors, and piano makers for his innovations and contributions to the technical world of pianos. And for four years running, he and his wife, Cindy, co-founders of Baldassin Pianos, have provided the piano that appears on stage to accompany soloists in Shen Yun Performing Arts‘ production in Salt Lake City.

The couple is proud of this fact and couldn’t say enough about their admiration for New York-based Shen Yun.

“To me, [Shen Yun] is thrilling,” Cindy began. “It’s thrilling visually, artistically, musically. The choreography is staggering, but the talent, the talent of the dancers are very gifted. And they work very hard, but their gift just shines. … The audience loves it. We sat by a man and as his wife tonight, and he just ooohed and aaaaahed all right through the concert. It was really fun to sit beside him. … It was really thrilling to see the audience so involved.”

Rick has enjoyed over four decades of piano expertise, being invited to conduct training seminars for the likes of Fazioli, Schimmel and other piano manufacturers in such locales as Moscow, St. Petersburg, Tokyo, and in Italy. Rick was the Chief Concert Piano Technician for the Utah Symphony Orchestra & Opera, and for the University of Utah. He served as Technical Support Director for Fazioli in North America, received the Piano Technicians Guild’s highest honor, the Golden Hammer, has penned publications and textbooks on the subject, and is now the Concert Technician at Brigham Young University.

As well-recognized business owners in the community with a worldwide reputation, the Baldassins have their finger on the pulse of the community and know how well-loved Shen Yun is there.

“It’s really an honor to have Shen Yun come year after year because I hear the public say, not during the performance, but the public talking. And they go: ‘I want to go to that,’ ‘I want to go,’ ‘I haven’t been yet and I want to go.’ And that’s exciting,” Cindy said.

“[Shen Yun] is always spectacular,” Rick said. “I love the colors. I love the movements. The stories, the humor was good tonight.”

Shen Yun’s mission is to revive authentic Chinese culture through performing arts such as classical Chinese dance, bel canto vocal performances, classical music, and more. This ancient civilization was once almost lost due to a campaign led by the Chinese Communist Party to eradicate it.

Business owner Cindy, also a visual artist, connects with Shen Yun’s desire to see traditional Chinese culture thrive again “because I read ancient Chinese poetry and I listen to Chinese music, especially the pipa and erhu. But for an audience to come year after year like this, and it is [often] sold out… That tells you that the audience, the population, it’s crucial to them because they want to learn and they want to experience and they want to participate.”

Rick and Cindy agreed that the performance imbued a divinely-inspired feeling onto the audience.

“And their name is very appropriate. Divine movement. … You can feel a spirit that’s strong.” Cindy said. Shen Yun translates into English as “the beauty of divine beings dancing.”

“It’s very uplifting. I really enjoy it,” he added.

Traditional Chinese culture has always been, since time immemorial, a culture deeply connected to and inspired by heaven. In fact, China was once known as “The Divine Land.” Shen Yun carries on this tradition by incorporating spiritual practices like Buddhism, Taoism, and Falun Dafa into the 20 or so vignettes in the performance.

“It’s a wonderful, beautiful, beautiful program,” Cindy said. She said the program was full of humor, depth, and even the challenges we face in the day to day.

“I think the audience connects with the depth of it. The stories and they can connect that into their own lives, and their own histories,” she said. “So this program, the stories really touch home.”

“Yes, we enjoy it every year,” Rick said.