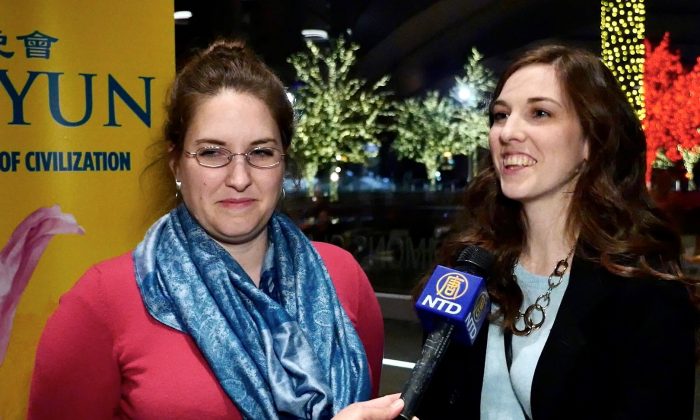 The New York-based production brought with it 5,000 years of Chinese civilization, conveyed through the universal languages of music and dance. The two saw a performance at the Winspear Opera House in Dallas on Jan. 2.

Through the music, Ms. Hemingway felt a familiarity as well as a “mystical quality.”

Ancient instruments like the thousands of years old pipa, a Chinese lute, and the vibrant suona play alongside a Western orchestra.

Ms. Hemingway described the orchestra as “just a beautiful sound overall. It made the performance complete.”

Ms. Jensen agreed: “It made it feel authentic and familiar and relatable at the same time.”

Through the language of dance, the two said they saw a wonderful message of universal values.

“Such a wonderful message I think they had—that they want to improve what China has right now,” Ms. Hemingway said. She expressed her sadness that under the current communist regime, people in China today are not allowed to freely practice spiritual beliefs.

With emotion in her voice, she lauded Shen Yun’s mission of reviving the traditional, inherently spiritual culture. “I hope it comes to pass, soon!” Ms. Hemingway said.

Ms. Jensen said the traditional values, like compassion and forbearance, were universal ones. “Everybody needs that from others, and others need it from us.”

“It was just wholesome and lovely,” Ms. Jensen said.