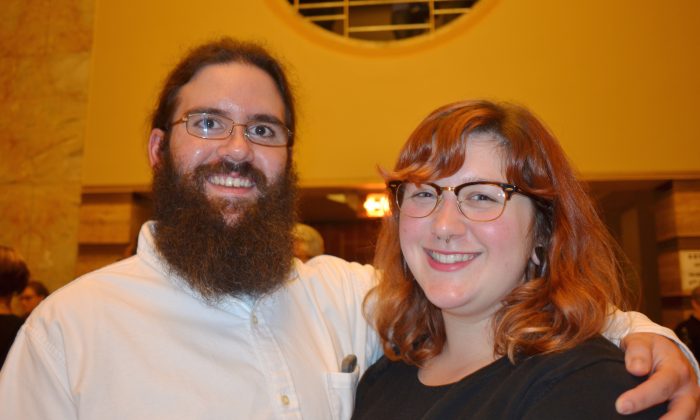 KANSAS CITY, Mo.—When Jerret Robinson came to the Music Hall Kansas City on May 7 to see Shen Yun Performing Arts, he really didn’t know what to expect. He left with a feeling of appreciation that he was really given a picture of traditional Chinese culture.

Based in New York, Shen Yun, a world-class dance and music company has set its mission to revitalize traditional Chinese culture through classical Chinese dance.

Ms. Kinnamon commented, “I think that the performers are really talented. And I like the variety and how many ethnic groups and different parts of the culture are represented. I think that is very interesting.”

From the professional eye of a photographer, Ms. Kinnamon thought the way the background was integrated with the performers was really clever. “It’s really seamless the way that the dancers relate to the background. So it’s a really nice tool that they are using,” she said.

“The way they have gone about telling the story, and introducing each scene, and the way that the dancers are synchronized, it’s really gives me a picture of the culture, said Mr. Robinson. “It’s something that I have never been exposed to, so I really appreciate that. It’s like I am taking all this new knowledge in a format that is so easy to digest and so entertaining. I really enjoyed that.”

According to the Shen Yun website, “Shen Yun cannot be seen in China today, where traditional culture has been nearly lost. Yet Shen Yun—a non-profit organization—has become an international phenomenon, bringing the wonders of ancient Chinese culture to millions across the globe.”

For Ms. Kinnamon, this was the main thing that she was going to take away from the performance. “I think it’s really important for people who that have this opinion, and who are representing those that have been mistreated, to be able to share that with a wider audience,” she said.

The main reason Shen Yun cannot be seen in China is because its principles are not in aligned with communist ideology. The fact of such suppression of this art form can be very saddening for audience members, especially after witnessing the some of the beauty and expressiveness depicted by classical Chinese dance.

“I think it’s beautiful. It’s very educational and intriguing to see the dance and to hear the beautiful music,” said Karen Prange, managing director of legal services for PMorgan Chase, also attending the evening performance on May 7.

Along with friends John and Carol Schillingsburg, they brought Ms. Prange’s son and a friend who are in their fourth year of learning Mandarin Chinese, “so that they could put together a language that they are learning with the beautiful culture in art,” said Ms. Prange.

Mrs. Schillingsburg commented, “I think it’s fantastic. I like the history they’re explaining with it: the dance, the symbolism, the colors. The choreography is phenomenal, and the singing is spectacular, just beautiful. It’s a real cultural event that came to Kansas City. … I’m glad I had the opportunity to come and see it.”

“It is a beautiful show, the color the energy that they exhibit up on the stage is fantastic. If they come back again we’ll come and see them again,” said Mr. Schillingsburg.