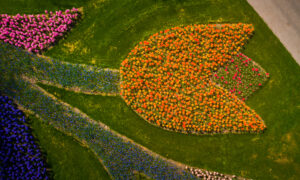 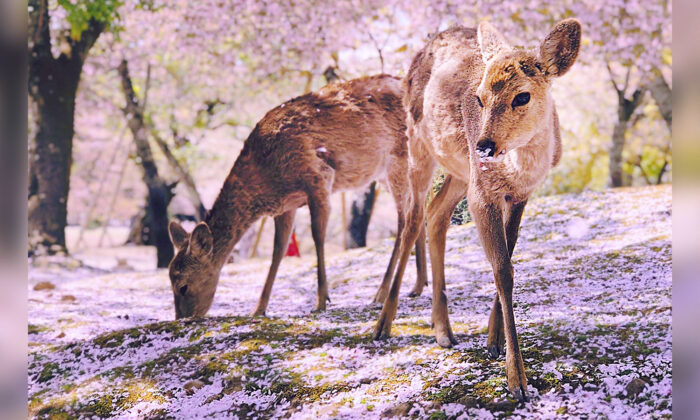 As a chill settles into the autumn air, some people might already be dreaming of spring. It may warm their hearts to fantasize balmy breezes, green grass, and pink cherry blossoms.

Last spring, Japanese photographer Kazuki Ikeda captured some surreal spring scenery in the cherry blossom capital of the world—Japan—and the world-famous, bowing Sika deer were seen there, frolicking like they’re in heaven.

And the video is here for you to enjoy in all its pink cherry blossom glory.

Back in March, as the pandemic had people locked down in their homes across the globe, the Sika deer of Nara Park found themselves without human visitors to bow to, or to feed them.

After the surreal video was taken, Ikeda commenced the photoshoot with an elegant Japanese betrothed couple dressed in exquisite traditional wedding attire, posing together in the idyllic Nara Park (just a short train ride from Osaka).

The Sika deer have made Nara Park famous, and have also captured hearts across the internet for having adapted the Japanese custom of bowing, adorably, which they do to “ask” tourists for deer crackers (sold in the park).

In March, when the lockdown had people shut in their homes, and the park was emptied of people, the deer were left crackerless, and they wandered into urban areas in search of food.

But as more people began to frequent the park again, so too did the Sika deer.

The unusually polite deer are considered a national treasure in Japan. Nara Park itself has also been awarded a certificate of excellence on TripAdvisor.

Photographer Ikeda hopes his photography will encourage more people to get out again to enjoy the park, and all of its beauty, or at least will bring some cheer to those still suffering from the lockdown blues.

“The pandemic is exhausting the hearts of people all over the world,” Ikeda told Bored Panda. “I hope this video makes people around the world feel at ease.”