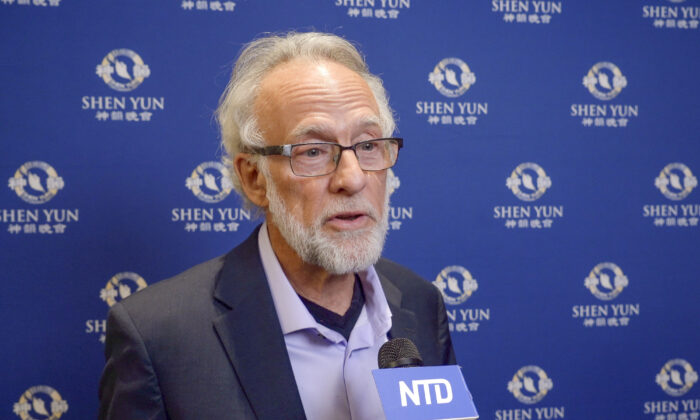 SACRAMENTO, Calif.—Photographer Bruce Robinson said that some beautiful things in life, like the beauty presented by Shen Yun Performing Arts, can’t be captured in a still picture.

“I think I’ve learned years ago about beautiful things,” Mr. Robinson said after seeing Shen Yun at the SAFE Credit Union Performing Arts Center on March 16. “It’s not always about taking pictures. Sometimes, you have to be in the present moment.”

Shen Yun is based in New York and is dedicated to presenting “China before communism.” Along with that, the performance showcases the spiritual wisdom preserved from ancient China, a time when people weren’t distracted by technology.

“I think we get so caught up in technology and all that is new, and I think that sometimes, we forget about the ancient side,” Mr. Robinson said.

He added that although some cultures have seemingly disappeared, there is great importance in preserving and reviving them.

“We have so much, there’s so much intelligence, and the cultures that were meant to be here is magical. I think … we’re seeing cultures come back.”

“I think what impresses me the most is that bringing the culture back, I think there’s so many of the cultures around this world that have been suppressed. And when we can bring them back and share it with the world, it’s just … wow, what joy,” he said.

Shen Yun‘s dancers are trained in classical Chinese dance, an ancient art form that has since influenced many other dance forms.

Mr. Robinson shared that one of the things that impressed him most in Shen Yun was the athletic ability of the dancers.

“I think the art of the beauty of the bodies, how the bodies move in the air, and it’s just well done. The beautiful storytelling, too,” he added.

Jim T. Chong, a radio host, was also in the audience. He shared his appreciation for Shen Yun presenting the beauty of China while also addressing issues of modern China.

“The art is really incredible: the artistic performances, the history and culture, but also the message of things that are happening because it’s a very humanitarian message,” Mr. Chong said.

Although China has had 5,000 years of brilliant culture, what most people know about China now is limited to its time under communism. The communist regime in China has prohibited Shen Yun from performing there.

“China over communism, right? And I think it’s a great message. I think communism is not something we endorse over here,” he said.

This is a spectacular performance, one of the best ever—anywhere.
— Jim T. Chong

Mr. Chong concluded with his high praise for Shen Yun saying, “This is a spectacular performance, one of the best ever—anywhere. This performance is especially great and historic to see during these times, just post-pandemic over here in the new performing arts center in Sacramento, California.”