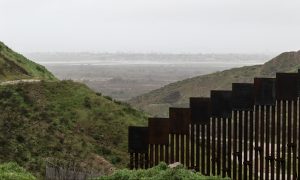 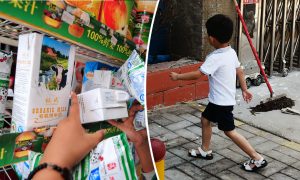 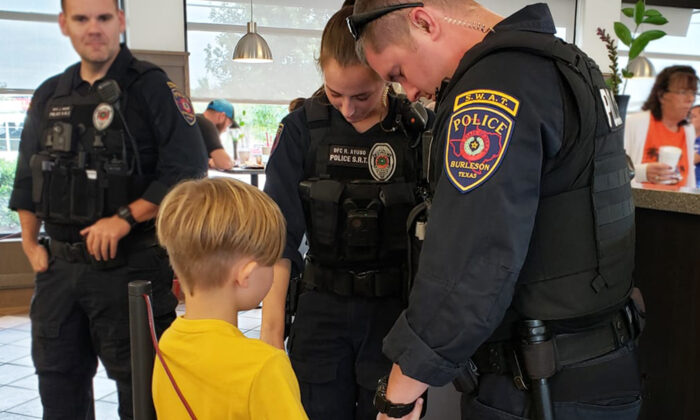 A photo of a little boy with a group of police officers in a Chick-fil-A was posted on Facebook and went viral. The remarkable thing about this image was what the little boy was doing in the restaurant: he was praying for the well-being and safety of the officers. A woman in the restaurant took the photo, and it touched many hearts all over the internet.

Kimberley Clark Stone, from Burleson, Texas, was in line at the popular chain restaurant when she noticed the incredible scene happening in front of her; three police officers walked in and got in line only to be approached by a little 7-year-old named Wyatt, who wanted to pray for them. “He grabbed their hands and prayed the sweetest prayers that I have ever heard,” Stone’s Facebook post read.

According to the post, the boy “thanked the Lord for calling them to be police officers and asked for the Lord to protect them while they were busy protecting people.” She concluded that his gesture “brought tears to [her] eyes,” which is why she snapped the photo to share on the social media platform.

The three policemen in question were officers Dicke, Ayuso, and Lyman with the Burleson Police Department. One of the officers’ wives, Lauren Lyman, recalled how seeing the picture moved her. “My initial reaction was a slew of emotions: Pride. Gratitude. Shock. Who is this kid so I can hug him?!” she explained, per The Western Journal.

Lyman said that her husband coming home from work with this type of news was a welcome change to her. “Most days, his stories are about the bad and the ugly,” she said. “Thursday, his story was all good. That sweet boy put JOY in a place where it’s rarely found.”

Remarkably, Wyatt’s mom, Jessa Cox, said that this type of behavior is not new or unusual for her son. “My husband Keith and I try and model what it means to really walk out our faith,” she explained. “And one of the ways we do that is to pray for people, this was not a one-time occurrence. I have seen my son pray for people many many times, and we have done that as a family as well.”

Mrs. Cox also took to Facebook to express her understanding on the viral photo of little Wyatt. “I just truly believe that the Lord is putting this photo in front of the eyes that are meant to see it. And even if out of these thousands and thousands of people … one heart is truly changed for HIS glory than it is all worth it,” she wrote in a heartfelt post.

The photo of Wyatt touched many hearts on the internet. Stone’s post garnered over 170,000 likes and was shared over 160,000 times. A few people commented and expressed how much the image moved them.

One Facebook user said, “This brought tears to my eyes! What a sweet little boy!”

And several others simply called it “Inspirational.”

Little did Wyatt know how much of an effect his prayer would have, not only by going viral but also for the loved ones of the officers he prayed for. “He didn’t have any idea how desperately our family needed this encouragement,” Lyman said.