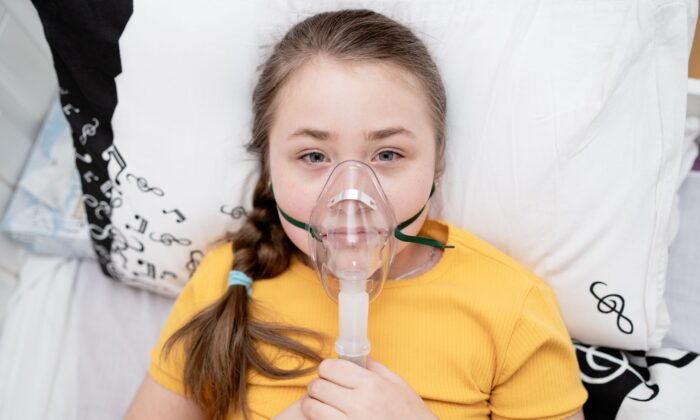 When viruses first invade our body, we have a short window to respond before they start replicating inside us.(Trzykropy/Shutterstock)
Mind & Body

Perhaps the Most Effective Weapon Against Viral Infections

Nebulized hydrogen peroxide is a safe, inexpensive, and incredibly effective way to help prevent and treat viral illnesses of all kinds.

That’s the conclusion of many, including Dr. Thomas Levy, a board-certified cardiologist perhaps best known for his work with vitamin C. Levy is an expert on nebulized hydrogen peroxide, which has become my favorite intervention for viral illnesses, including COVID-19. In his latest book, “Rapid Virus Recovery,” Levy details this treatment. He’s giving the e-book away for free, and the 321-page physical book will be available soon online. It’s also available in Spanish.

Levy suffered with lifelong sinus problems. About a year and a half ago, while doing research for his book on magnesium, he came across nebulization with magnesium chloride, which sparked his interest.

As a result of his research, he began nebulizing with hydrogen peroxide and noticed incredible changes in his health almost immediately, including the reversal of his chronic sinus problems. So, after finishing his magnesium book, he took a deep dive into nebulization, and “Rapid Virus Recovery” was the result of that journey.

Levy’s research and direct observation led him to a startling conclusion—that nebulizing hydrogen peroxide is so effective it can stop virtually any cold or flu infection in its tracks if used quickly enough, and help those already infected to recover more quickly.

Levy also points out that if you can easily prevent or cure a viral infection, then vaccination becomes irrelevant. “Why vaccinate for a disease that you can prevent or easily cure after you have it?” he asks.

“Nebulized hydrogen peroxide is not only simple to administer to yourself and universally effective, but it’s also inexpensive and readily available around the entire world.”

So far, medical doctors who have treated COVID-19 patients agree that if treatment begins early enough, patients almost always fully recover and have no longstanding side effects from the infection.

The reason for this is because the virus replicates wildly during the first few days of infection, and this is when it can cause longstanding damage. So, it’s important to be prepared.

Buy the required supplies before you need them, so you have everything and can treat yourself at the first signs of symptoms. Levy said same-day resolution of the infection is common, which is almost unheard of in clinical medicine.

My personal experience with friends and family also mirrors these types of dramatic results. In all my years of practicing medicine, I have never seen such an effective intervention for the nearly immediate resolution of viral illnesses, so long as it’s implemented shortly after the symptoms start.

If you miss that early window and start developing more pronounced symptoms of infection, nebulized peroxide is still an excellent adjunct to any other treatment you may be doing.

“I want to emphasize that because to the best of my knowledge, and I’ve done quite a bit of research on this, I see no circumstance in which hydrogen peroxide nebulization interferes with or lessens the impact of any other positive intervention,” Levy said.

One such intervention is vitamin C, which Levy described as “the perfect physiological partner” with hydrogen peroxide, as they have powerful synergistic effects that facilitate rapid resolution of the infection.

Part of Your Body’s Natural Defenses

Hydrogen peroxide is part of your body’s natural defense against pathogens and is found in virtually all cells. Your body requires it. It’s a powerful signaling molecule, and there are organelles in your cells that use it to kill pathogens directly. So, when you nebulize hydrogen peroxide, you’re really just augmenting your body’s natural defense system.

“Up to 5 percent of the oxygen you inhale gets incorporated into producing new hydrogen peroxide inside your body.”

This hydrogen peroxide also serves as an oxygen reserve for your body, Levy said. “This is what makes peroxide a perfect therapeutic agent. It not only kills pathogens extremely efficiently—virus, fungus, protozoa, bacteria, you name it—but it also leaves behind, as metabolic byproducts, water and oxygen.”

Once the infection is resolved, the water and oxygen will both help heal any tissue damage caused by the pathogen. The water will also help dilute the acidity introduced by the infection. “So, it’s very clear, at least to me, that the best way to refer to hydrogen peroxide is as nature’s naturally designed antibiotic,” Levy said.

Hydrogen peroxide can impact a variety of beneficial pathways in your body. Pathways are metabolic chain reactions that fuel your molecular body. One of the best such chain reactions for getting rid of pathogens is the Fenton reaction.

As explained by Levy: “The Fenton reaction is a way of getting hydrogen peroxide to break down into a hydroxyl radical, which is the most potent oxidizing agent known to science.”

“When you want to kill a pathogen or kill an infected cell, you want to continue the influx and the power of that oxidative action until there’s so much oxidative stress that the cell ruptures and dies, or the pathogen ruptures.”

Vitamin C plays an important role in this reaction by promoting the production of more hydrogen peroxide. Your primary pathogen-killing immune cells—macrophages, polymorphonuclear leukocytes, and monocytes—also bring vitamin C and hydrogen peroxide in massive amounts to the site of inflammation or infection.

There are a variety of opinions on how to best prepare a nebulizing solution, but for those wishing to use this treatment, it is necessary to have the equipment on hand before it is needed. As stated, this therapy works best at the very outset of a viral infection.

Beyond a nebulizer (an electric, plug-in tabletop jet nebulizer is best, as battery-driven handheld devices tend to lack sufficient power) you will also need food-grade hydrogen peroxide and saline.

Levy attests to the safety of the therapy but also advises that people moderate the therapy as needed.

“I never advise somebody to tolerate symptoms that they find uncomfortable. I always say, find a concentration of whatever you’re nebulizing that’s comfortable. But that said, I still think when you clearly have an infection, hit it hard the first few times. I don’t think you’re going to do any damage.”

For more details, be sure to download Levy’s book “Rapid Virus Recovery.” It’s a free download. Also be sure to share it with your friends, family, and social networks. Nebulized hydrogen peroxide is a simple, inexpensive way to improve your health and safeguard against viral infections of all kinds, and anyone can use it.