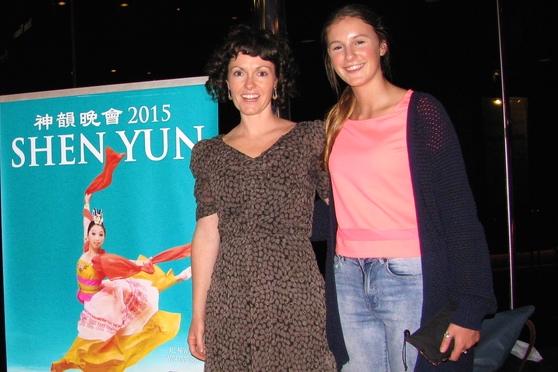 “You can see that the artists are so disciplined. … Really relaxing and enjoyable to go see this performance.”

For 5,000 years divine culture flourished in the land of China. Humanity’s treasure was nearly lost, but through breathtaking music and dance, Shen Yun is bringing back this glorious culture, according to the company’s website.

“It was very diverse, each dance piece was different from the one before and the music punctuated the dance pieces very beautifully as well. The use of the background visuals was fantastic, really engaging and helped to bring the stories alive that are quite mythical, really,” said Ms. McLean.

For her friend Eloise McDonalds, a student, Shen Yun had the ‘Wow!’ factor. She found the experience mesmerizing.

“Incredible, the blend throughout was just amazing. The sound was just really good.”

The resounding voices of bel canto soloists are an integral part of the Shen Yun experience.

“I was just entranced, the vibrato and quality of their tone, and voice was really rich,” said Ms. McDonalds.

‘It gave me butterflies’

“Spectacular, absolutely mind blowing” was how nursing student Felicity Button described her experience of Shen Yun. She watched the performance with her mother Claire, as part of a group celebrating their birthdays this week.

With a background of 21 years of calisthenics and six years of ballet, Ms. Button found the dancing and the choreography to be breathtaking.

“You look at their dancing, and it seems so effortless, and like they’re flying through the air. It’s so beautiful to watch.

“It gave me butterflies. It made me feel envious and ecstatically happy.”

Ms. Button felt a feeling of hope coming from the performance.

“No matter how hopeless you feel, there’s always a light at the end of the tunnel. There’s always a rainbow behind those clouds … stay true to yourself and whatever you believe in and you’ll find it.”

Claire Button, a retired nurse with a musical background of singing and piano, admitted she was ‘jealous’ of the pianist who accompanied the singers and instrumentalist.

“She was just brilliant. It was really perfection.”

The primary trait that distinguishes the singers of Shen Yun is their use of bel canto technique to sing Chinese text. These singers’ ability to do this is unparalleled, says the company’s website.

As a singer herself, Mrs. Button was in awe of the sopranos.

“The first one had a beautiful timbre in her voice. And the second one, the vibrato was just amazing. It was gorgeous. Their voices were like instruments. They were just magnificent.”

Ann White, a registered nurse, also part of the birthday group, was very appreciative of the orchestra.

Shen Yun’s symphony orchestra is the only one in the world with Chinese instruments as permanent members.

“I loved it. A live orchestra! The music was fabulous. The way the dancers kept with the music. I could understand the story very well. It told a great story. It was absolutely mind blowing… the color, the dancers, the talent, it was fantastic,” she said.

It was also a birthday celebration for Charmain Stothard, a lawyer Solicitor and BarristerJD (Law) Melbourne.

Ms. Stothard confessed to having no musical or dance background, but that didn’t stop her having a great experience of Shen Yun.

“I loved it. Very emotional. I thought, the whole thing very enjoyable. Enjoyed every bit of it.”

“I just thought it was fantastic, stunning. I’ve never seen anything like it before. It was just amazing”, she said.

“It just draws you in completely, and you’ll be a different person afterwards.”