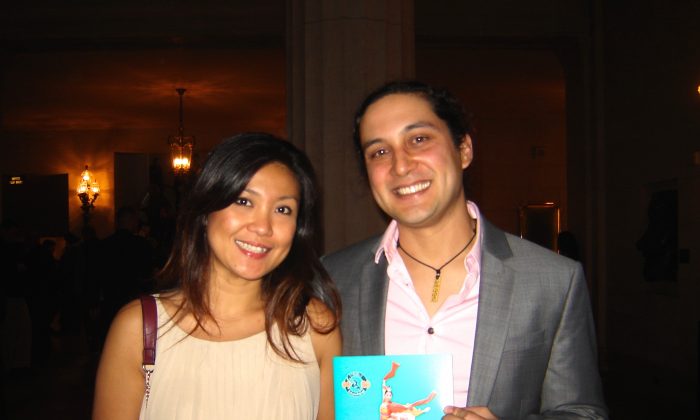 Mr. Quesada is a performer in the Filipino traditional arts who plays many different Filipino instruments. Lydia Neff, a dancer, attended the performance with him.

Both were moved by Shen Yun’s display of classical Chinese dance. Based in New York, Shen Yun is on its ninth world tour with the mission to revive 5,000 years of ancient Chinese culture through dance and music.

“I love it.” Ms. Neff said. “I can tell that all [dancers] have classical training.”

“It’s really nice to see something on this scale, this level, in the nicest venue in San Francisco,” Mr. Quesada said. “It’s really impressive, very enjoyable.”

“I really enjoyed the combination of the orchestra with the Chinese traditional instruments,” he said.

Shen Yun’s website explains, “A Western orchestra plays the foundation, while traditional Chinese instruments lead the melodies. The sound produced is uniquely pleasing to the ear.”

“The compositions were very grand,” Mr. Quesada added. “It was really amazing to see how with just a few ethnic instruments, they can really get that type of character out of the sound. So it was very impressive.”

“It’s a very touching piece,” he said. “That solo has a very good range, where you can hear the different qualities of the instrument—it can be rhythmic and percussive, and it can also be very melodic and delicate-sounding. It’s very nice.”

The Erhu is a two-stringed instrument with 4,000 years of history that is sometimes likened to the Western violin. It is known for evoking deep emotion and is said to sound like a human voice.

“I really liked the plot of how they weaved into the history of China, including the relation to the present time,” Ms. Neff said.

Telling stories through dance is a hallmark of Shen Yun’s performances. Ms. Neff enjoyed the tales from ancient and modern China, and she was especially touched by the dance piece The Divine Renaissance Begins.

This modern-day story depicts a father and daughter whose lives are changed during the persecution of Falun Gong, a Chinese spiritual practice with roots in traditional Chinese values.

“I really liked the story of the general that became exiled into the mountain,” Mr. Quesada said. “That one was very exciting.”

He was referring to the dance piece Outlaw of Mt. Liang, which is based on the classic Chinese saga Outlaws of the Marsh.

“I like how they weaved into the digital background with the stage performance,” Ms. Neff said.

“It does a great job of introducing some of the stories and mythology to a non-Chinese audience. I would definitely watch again,” said Mr. Quesada.