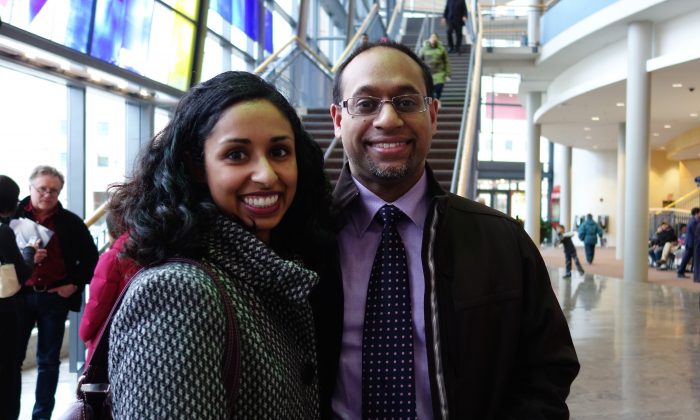 MISSISSAUGA, Canada—Professional percussionist Mark Joseph didn’t beat around the bush when asked what he thought of Shen Yun Performing Arts after seeing the performance at the Living Arts Centre on Sunday.

“I loved it. I have been hearing about the show for a long time and finally I had an opportunity to come, and I’d come again,” he said.

“It really has been over a year since we started seeing posters and I thought ‘wow, that looks like something really new and exciting and different.'”

Mr. Joseph was the head of percussion and instructor at Merriam School of Music and has been teaching young drummers and percussionists for almost 20 years.

He now works as a freelance musician, playing live with bands and recording in studio sessions with various artists.

His wife, Sophie, a nurse, also liked the show.

“I really enjoyed it, I thought it was a great performance,” she said.

While New York-based Shen Yun is a classical Chinese dance company, it tours with its own musicians, a symphony orchestra unique for its inclusion of traditional Chinese instruments as permanent members. Mr. Joseph had warm words for their abilities.

“I thought they were great,” said Mr. Joseph, complimenting the mix of traditional Chinese and Western instruments.

“I think it came together really well and nothing took away from the other. As a musician I don’t want to be distracted from the overall performance, and all it did was just complement everything that was happening on stage, so it was really great,” he said.

He had not seen the erhu live before and had been looking forward to it.

“When I saw that was on the program I got really excited. And I thought it was just amazing.”

The erhu is China’s two-stringed violin, an ancient instrument with a hauntingly beautiful sound known for its emotive range. Sunday’s performance featured a solo by erhu virtuoso Mei Xuan.

Mrs. Joseph was also enthusiastic about the performance.

“It was great, it was beautiful to watch, just all the visuals and the colours. Everything was fantastic,” she said.

“The costumes were beautiful. Quite a few times I poked my husband and said, ‘that’s a really nice dress,'” said Mrs. Joseph with a smile.

Besides its dancers and musicians, Shen Yun is also known for its digitally projected backdrop. The vivid animations there extend the stage and have direct interactions with the dancers on stage.

“It was very clever, I wasn’t expecting it,” said Mr. Joseph.

He said none of the advertising or videos online showed what Shen Yun had in store with its backdrop.

“They didn’t hint that there was a use of technology, but again it wasn’t distracting to the performance even though it was such a new thing.”

“It really widened the scope of your imagination as to what was going on,” he said.