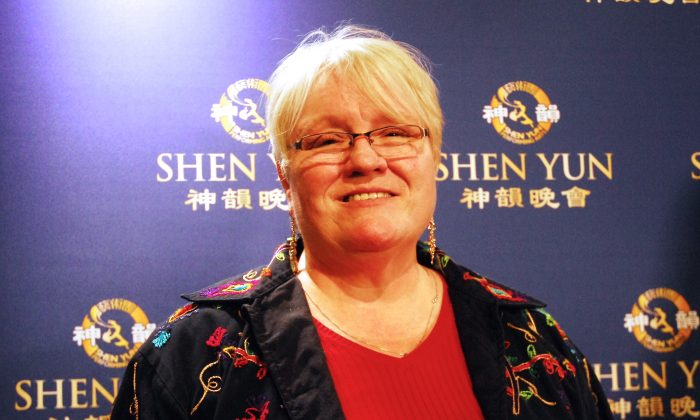 Pastor Karen Stoffers-Pugh was touched by the joy of the dancers after she attended Shen Yun Performing Arts World Company at the Rabobank Theater in Bakersfield, Calif. on Feb. 27. (NTD Television)

BAKERSFIELD, Calif.—”I feel inspired. My heart feels more open. It makes me feel that I can really understand people of a different culture than myself. I’m so thankful that in a place like Kern County, we have this opportunity,” said Pastor Karen Stoffers-Pugh, after attending Shen Yun Performing Arts.

Shen Yun is an experience that brings people face to face with the true culture of China, which was once known as the Divine Land. Pastor Karen said, “It’s a wonderful message to understand about the culture of China and how people really feel.”

Pastor Karen serves at the Wesley United Methodist Church in Bakersfield. She and her husband attended Shen Yun Performing Arts World Company at the Rabobank Theater on Feb. 27.

Shen Yun, a non-profit organization, was established in New York in 2006 by a group of leading classical Chinese artists to revive the ancient culture of China, which was long considered to have been a gift from the Divine.

“It’s beautiful,” said Pastor Karen. “The costumes are beautiful. The movements are so graceful, like they’re floating on a cloud, and the men’s dancing is so powerful.”

A Shen Yun performance, comprised of over 20 vignettes, takes audiences on a journey through China’s history, where myths and legends come to life, and virtues such as bravery, compassion, kindness, loyalty and perseverance, which were once held in the highest esteem, are personified.

Referring to a particular vignette that depicted how the power of compassion can withstand persecution, Pastor Karen said, “If we have compassion for each other, then we can make this world a better place.”

Interspersed between the vignettes are operatic songs, sung in Chinese by award-winning sopranos who use the bel canto vocal technique. The audience can follow the English lyrics projected on the digital backdrops.

Not only was Pastor Karen enchanted by the sopranos, she was touched by the lyrics of the songs: “Especially the second song was very beautiful. It made my heart both afraid for her and for other people who speak with such freedom, and also with joy that they have that ability to be free and speak those words.”

The freedom that Pastor Karen was referring to is the freedom of belief, which is no longer upheld in China today under communist rule. Because of this, Shen Yun is not able to perform in China. However, beyond China’s borders, Shen Yun has the freedom to revive these traditions throughout the world.

Pastor Karen could even sense this freedom in Shen Yun’s dancers.

“They just seem like they are very pure and intentional, and they’re in their heart, and it comes through in their performance—that they feel very free,” she said.

Finally, the pastor wanted to thank the performing arts company for coming to Bakersfield.

Shen Yun Can ‘Reach people in their hearts’

“I do believe that they were able to reach people in their hearts,” said audience member, housewife, and mother Kandy Herrick of Shen Yun’s performers. “I think everybody here felt that tonight.”

Mrs. Herrick purchased Shen Yun tickets with her husband and two friends back in October. Although both her husband had hip surgery and one of her friends had knee surgery in the month of February, all of them wanted to attend Shen Yun so much that they were able to make it happen.

“We are really glad we did,” said Mrs. Herrick.

Mrs. Herrick enjoyed all the different elements of comedy, tragedy, and spiritual freedom within the stories portrayed by the dancers and the lyrics sung by Shen Yun’s sopranos. Mrs. Herrick said the performance brought up many different kinds of emotions for her, and she even shed tears at the artists’ commitment to bringing their traditions to the world.

“It was absolutely beautiful,” she said. “It was very peaceful. It was very warm.”

One truly unique part of a Shen Yun performance is the digital projected backdrop, which both provides a background of beautiful Chinese scenery and interacts with the dancers, allowing them to appear to perform the magical feats of Chinese legends.

“That was so professionally done,” Mrs. Herrick said. “All the digital scenes were gorgeous.”

She was deeply touched by the soloist singers, who she said were “beyond wonderful,” saying “their voices were like from Heaven,” and she also loved the solo performance of the Chinese two-stringed violin known as the erhu.

“There was so much emotion put into that,” she said.

Overall, Mrs. Herrick thought Shen Yun was very professional and the colors were beautiful. She said her husband and friends also loved the performance.

“I’m glad I came tonight,” she said. “It’s very inspirational.” She said over and over again that she encouraged everyone to come see Shen Yun.

Shen Yun is ‘Empowering and inspiring all at once’

“Oh my gosh, I loved it,” said audience member Safiyyah Desouza, who is a college student majoring in Psychology. She said she became emotional during the Shen Yun performance.

“I think it’s so empowering and inspiring all at once,” she said. “I think that there’s so much work that’s put into this. I loved it. I thought that all of this was more regal and more special than anything I’ve ever seen.”

Ms. Desouza thought that the energy within Shen Yun’s music was very healing, and the message was very inspirational.

“I think the message was human empowerment,” she said, and described a scene in the performance in which a young man changes his course from creating pain and suffering to one of goodness and understanding. “He changed and he came to a higher purpose,” she said.

Ms. Desouza has also been studying dance, and the abilities of Shen Yun’s dancers were extremely inspirational to her.

She was very pleased to hear that Shen Yun produces an all-new program every year, and she said she couldn’t wait to bring her family to the next performance.

In a word, Ms. Desouza described Shen Yun as “life-changing.”