Pastor and Wife Find Universality and Commonality In Shen Yun 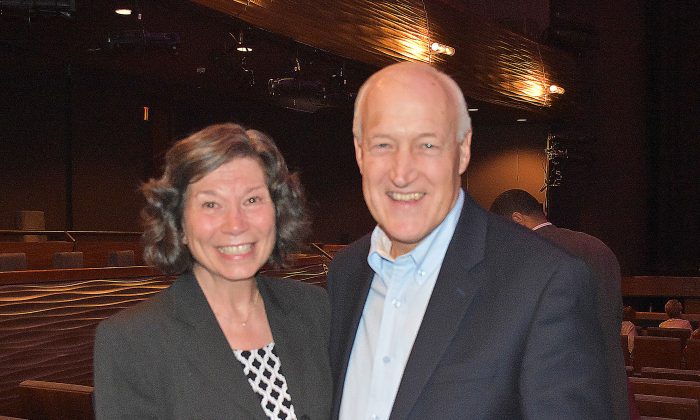 They had read about Shen Yun and came to see it for themselves.

“I think it’s wonderful that a group of people are continuing this beautiful heritage after all these hundreds, and thousands of years,” said Pam Myers.

Headquartered in New York, Shen Yun’s mission is to revive traditional Chinese culture, almost lost to the modern world. They use traditional forms such as Chinese and western classical instruments, and classical Chinese dance, which is graceful yet technically demanding, involving tumbling and leaps through the air.

“The athleticism that must take place in order to train to do these beautiful moves, it just takes a lot of time I would think, and a lot of energy,” said Pam Myers. “The costumes are beautiful. The colors are vibrant. So it’s just very enjoyable.”

David Myers was moved by a dance story that depicted a grave situation for many people in modern China.

“I think the most emotional piece for me was the one about religious persecution,” he said. “To see that still going on is very sad. It’s hard for us sometimes to comprehend right here that that’s happening elsewhere. So that was very touching.”

In China, the communist party exerts political control over religion and spirituality. Those who do not comply with political subversion face danger. Over 100 million people who practice Falun Dafa have faced this political persecution, and Uighurs and many Christians in China face it as well. The climate of political persecution by the communist party, on spirituality and the nation’s culture, makes it impossible for Shen Yun to travel there to portray Chinese culture, spirituality, history, and traditional Chinese dance forms.

Pam Myers said, “I was surprised that this cannot be performed in China. That’s very sad, because it’s beautiful. It’s just beautiful.”

David Myers was surprised by some of the spiritual universality he saw in Shen Yun.

“Interestingly, I saw a number of parallels between those aspects and what we believe,” he said. “I think we have much more in common than is often times thought to be the case, which to me was very interesting. I hadn’t heard Chinese culture talk a lot about a Creator. A single Creator in that sense. We’ve heard about Confucius and Buddha and other influences in Chinese culture, but hadn’t understood that before.”

China has a 5,000-year history and has an intrinsic relationship with divinity. Essential to it are the spiritual values that have flourished and found expression through each dynasty.