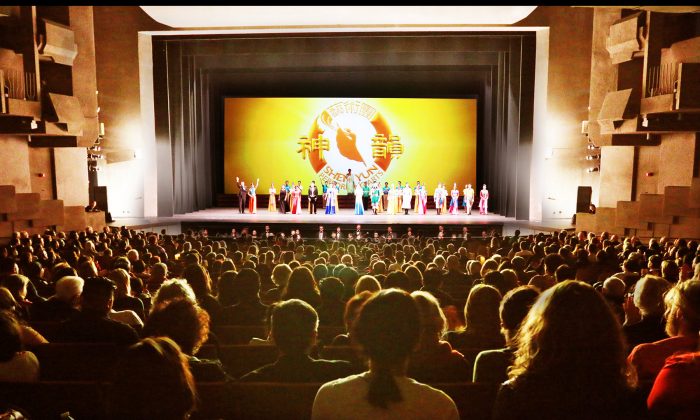 BERKELEY, Calif.—Between juggling work, community service, and travel, Maryn and Garry Hurlbut say it is easy to get caught up with the day to day happenings of our world. But a recent visit to California’s Berkeley Zellerbach Hall to experience Shen Yun Performing Arts allowed the couple a glimpse beyond what our world has to offer.

“It’s an inspiration to me, to think that there are such angelic thoughts, movements, and beings existing in our plane now,” said Maryn Hurlbut, City of Richmond’s recreation and parks commission chair, who attended the performance with her husband on Dec. 12. “[It] gives me an inspiration that the next plane is even more heroic and beautiful.”

Angelic may not be an exaggeration. New York-based Shen Yun Performing Arts is the world’s premier classical Chinese dance and music company. The company’s name, Shen Yun, means the beauty of divine beings dancing in the heavens, according to its website.

Shen Yun’s mission is to revive China’s 5,000 years of divinely inspired culture through the performing arts. China itself was once known as Shen Zhou, or the Divine Land. Shen Yun’s dances feature this semi-divine culture through its depiction of myths and legends, celestial paradises, and divine beings—a concept that has endured in Chinese lore throughout the centuries.

Many of these cultural aspects are portrayed in Shen Yun’s story-based dances, which Maryn said was important for people to see, as they contain valuable lessons about history.

“We’ve learned [from] stories that hardship and wrongs are always vindicated because right wills out,” she said. “And it’s important to continue the stories to give courage to people, to do the most they can, to pay back for any gifts that they have been given.”

Chinese history has been well-documented and passed down uninterrupted for 5,000 years—sometimes in vivid detail, according to the company’s website. Thanks to ancient records and classics spanning millennia, Shen Yun has been able to revive this ancient civilization on stage.

Like his wife, Garry Hurlbut, president of the Richmond Tennis Association, was inspired by the performance on a fundamental and personal level. He said the performance has reminded him to strive to become a better person, to look beyond the day-to-day.

The Hurlbuts not only gained new insights watching Shen Yun, but were amazed by the amount of coordination and skill that went into bringing the performance on stage.

“It’s just the dynamic. It’s just amazing—the coordination and the synchronization of everything,” Garry said. “And also the backdrops are just so clever. At first, you think it’s just a backdrop, then oh wait, there [are] people moving there.”

To bring the everything together, Shen Yun uses a unique digital backdrop that complements and synchronizes all aspects of the performance, including the characters, the color of the costumes, specific dance movements, props, lighting, the story being told, particular notes played by the orchestra, and special audio effects, according to the company’s website.

Maryn echoed her husband, praising the “fluidity of the music and dance.”

“Everything, the women, certainly looked very beautiful. And their movements are so graceful and almost heavenly,” she said. “It’s really lovely to watch—it’s uplifting to watch.”

In addition to the various dance pieces, Shen Yun performances also include solo musicians. On Dec. 12, tenor Gu Yun sang the original piece, “The Divine Path is Near.”

Maryn said she was  uplifted by the lyrics of the song the tenor performed. Shen Yun also showcases soloists who use the bel canto technique to sing—a technique believed to produce the most beautiful and pure tone of voice, according to its website.

The words, though Chinese, were translated in English on the backdrop as well.

With reporting by Qian Zhang and Janita Kan.