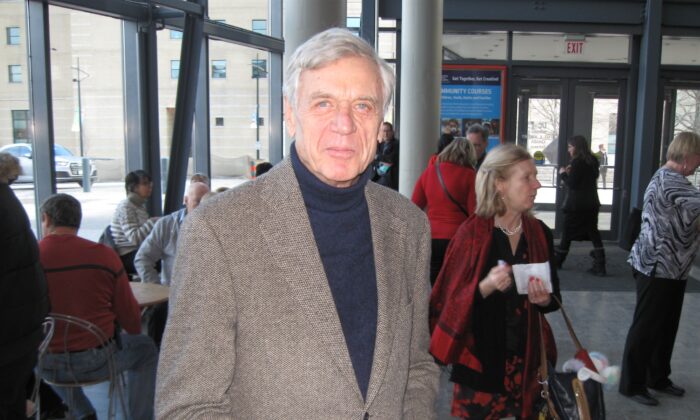 MISSISSAUGA, Canada—News of a classical Chinese dance company from New York spread through Ontario this month and reached two of the nation’s paragons of business leaders who attended in Mississauga: former biotechnology CEO and performing arts board member David Allan and Invis/Mortgage Intelligence CEO Cameron Strong.

Both saw Shen Yun Performing Arts at the Living Arts Centre on Jan. 12, 2020, and were struck by what they called its brilliance and excitement.

Allan has held executive and board leadership roles at Stem Cell Therapeutics and YM BioSciences, Inc., including serving as CEO for the latter corporation. He is a former member of the Awards Selection Committee for the Networks of Centers of Excellence in Canada and former Governor of The Toronto Stock Exchange.

Today, he’s a private consultant in the biotechnology field and he brought his business acumen to bear when assessing Shen Yun’s management, which is unique in the performing arts world.

“The show is spectacular. First of all, with the whole promotion of this season, it’s exactly what one would see when you get here. So it’s brilliantly done.

Allan is a long-time patron of the arts. He served as a Governor of the Shaw Festival Theatre, the biggest of its kind in Canada and the second-largest repertory theater in North America. And he has been a member of the Board of Trustees for the Ontario College of Art and Design.

He applauded Shen Yun for its success in many artistic categories.

“First of all, the costuming, of course. And secondly the backdrops—they’re enormously creatively presented. Then you get to the athleticism of the dancers—for those of us who are not familiar, it is spectacular,” Allan said.

“Shen Yun lives up to its reputation and it’s just been a spectacular afternoon so far,” he said.

Cameron Strong was also in attendance on Jan. 12, and shared how the performance made him feel a yin-yang combination of peace and exhilaration. Strong is the CEO of a nationwide mortgage and insurance corporation, Invis/Mortgage Intelligence, and is also a percussionist.

“This is our first time coming to the show. We’re impressed by the skill of the dancers. Very incredible, high skill. Just beautiful performances, costumes, music, everything. I love a live orchestra as well. Stunning, stunning really,” Strong said.

His performing arts background allowed him to elaborate in detail about the effect Shen Yun’s dances and music had on him.

“There’s the excitement of [Shen Yun’s dances] and the exhilaration of that, but there’s also a lot of peace in the movements, very much. The movements are very deliberate as well. It’s very interesting: it makes you calm and very peaceful, and other times…  There’s like a yin and yang in there,” Strong said.

“I love orchestra music, it’s so much better than listening to something out of the speakers, so, live music just adds to the whole feeling and really matches the dancer’s flow. The use of instruments is quite unique as well. I’m a percussionist myself, so I really enjoy the different music that’s played. I can hear the harp, I can hear the bells, I can hear the oriental percussion in there as well,” he added.

Shen Yun’s original musical compositions employ Chinese melodies and instruments set against Western orchestration to capture, as its website states, “the essence of East and West and the expression of inner feelings.”

Shen Yun’s mission is to revive China’s traditions and authentic culture through highly-expressive ancient art forms such as classical Chinese dance, musical traditions, and the rebirth of the true bel canto method of singing, which was lost over time in Europe and China.

Each year, Shen Yun’s artistic director composes all of the original scores for the season’s performance. Shen Yun sends seven touring companies around the world, each with its own orchestra to accompany the dancers.

“The music is quite complex. To reproduce that would be difficult, I suspect. It’s very complex. As a percussionist myself, I can see how complex the musical score is,” Strong said.

“I would wholeheartedly recommend Shen Yun. Go to the show—enjoy,” he added.

With reporting by NTD Television, Omid Ghoreishi, and Brett Featherstone.