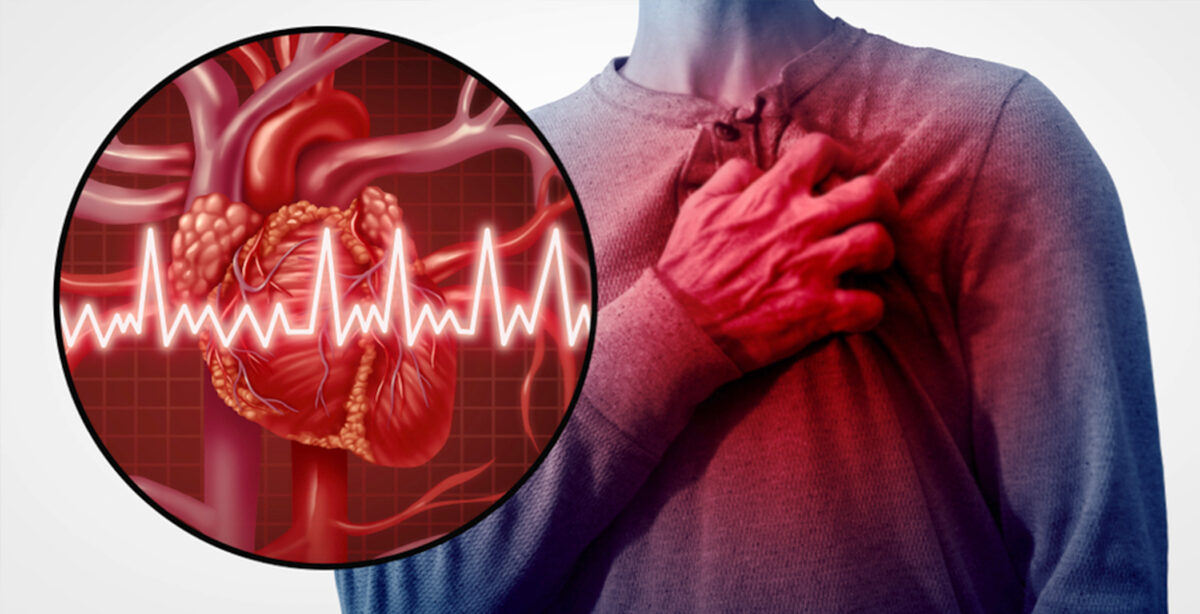 Panic Attack or Heart Attack? How to Know the Difference

25% of emergency room patients presenting with chest pain met the criteria for something else entirely, yet attending emergency department cardiologists failed to recognize it 98 times out of 100.

According to the U.S. Centers for Disease Control and Prevention, nearly 805,000 Americans have a heart attack each year, and 605,000 are first heart attacks. Knowing the risk factors, symptoms and how to take early action will increase your chances of survival.

However, what may look and feel like an apparent heart attack may actually be a panic attack, and according to researchers, the cost of misdiagnosing noncardiac chest pain is high. “It is important for physicians to be able to recognize panic attacks and to distinguish them from cardiac disease, thus avoiding unnecessary use of health care resources,” one report states.

An investigation published in 1996 found that 25% of emergency room patients presenting with chest pain met the DSM-III-R criteria for panic disorder, yet attending emergency department cardiologists failed to recognize patients having a panic attack 98% of the time. As noted by the authors:

“Panic disorder is a significantly distressful condition highly prevalent in ED [emergency department] chest pain patients that is rarely recognized by physicians. Nonrecognition may lead to mismanagement of a significant group of distressed patients with or without coronary artery disease.”

So, just how do you tell the two apart? Before we get into those details, let’s take a look at the common signs and symptoms associated with each.

When a heart attack starts, blood flow to your heart has suddenly become blocked and the muscle can’t get oxygen. If not treated quickly, the muscle fails to pump and begins to die. While often a result of coronary heart disease, a heart attack can also be caused by a blood clot blocking an artery. Some of the most common symptoms of a heart attack include:

A panic attack typically comes on abruptly, producing intense fear and a sense of impending doom or even death that is typically severely disproportionate to the situation at hand. Common symptoms include:

Panic attacks tend to peak within 10 minutes, and most subside within 30 minutes. Few last more than one hour. It’s not uncommon for people to seek medical help, thinking they’re having a heart attack or are dying, when panic attacks first set in and they’re unfamiliar with the symptoms.

How to Tell Them Apart

While it can be very difficult to tell a panic attack from a heart attack, some generalizations can be made that can help tell them apart.

When in doubt, seek immediate medical attention. It’s better to be safe than sorry, as sudden death is the most common symptom of a heart attack. As noted by Dr. Sam Torbati, medical director of the Ruth and Harry Roman Emergency Department in an interview for Cedars-Sinai Medical Center:

“Unfortunately, there is great crossover between the symptoms of panic attack and heart attack, making it very challenging to discern between the two without a physician assessment and testing, such as an EKG.

Common symptoms that may affect patients with either a panic or heart attack include chest pain, shortness of breath, dizziness, sweating, passing out, tingling, or a sensation of impending doom.

These shared symptoms of heart and panic attack may also be caused by other serious conditions such as blood clots, lung infection or collapse, or tear in the large vessels of the chest for patients with certain pre-existing risk factors. So when in doubt, seek immediate medical attention …

The best predictor as to whether symptoms are due to panic versus heart attack is the patient’s age and previous history of panic attacks … Patients should immediately go to the ER if they have new onset chest pain (tightness, squeezing, heaviness), shortness of breath, sweating, lightheadedness, pain that radiates to the jaw or arm, or a ripping sensation in their chest or back.

Heart attacks tend to occur in middle-aged people and older age groups, so the older the person is, the lower a threshold they should have for coming to the ER right away.

It’s also worth getting your symptoms checked out even if you’re certain they’re due to a panic attack. Some research suggests there may in fact be a connection between panic disorder and coronary artery disease, although the exact relationship is still unclear. According to a 2008 review in The Primary Care Companion to the Journal of Clinical Psychiatry:

“There are several reasons to consider that a relationship between panic disorder and coronary artery disease (CAD) might exist. First, panic disorder has been linked to other forms of cardiac disease.

Second, the most likely source of the chest pain during panic attacks is ischemia. Finally, there is evidence that panic disorder may be associated with cardiovascular risk factors, such as hypertension, hyperlipidemia, and smoking.

Panic disorder is associated with several cardiac abnormalities. In addition to patients with panic disorder having elevated standing heart rates, 10% have an arrhythmia.

Case reports have linked panic disorder to a descending aortic aneurysm and pulmonary hypertension secondary to an atrial septal defect with pulmonic valve disease. However, the strongest association is between panic disorder and mitral valve prolapse (MVP) … but MVP is not likely to be the source of chest pain.

In addition, the significance of the panic-MVP relationship is unclear … Indirect linkages via autonomic vulnerability or dysfunction have … been proposed. However, the most likely explanation is that the decreased left ventricular volume due to the tachycardia seen in panic disorder produces the MVP.”

The review cites evidence suggesting ischemia is the cause of the chest pain felt during a panic attack, and researchers have found there’s an association between panic attacks and ischemic and nonischemic chest pain alike. According to the authors, “Myocardial ischemia could cause panic attacks via increased catecholamines or cerebral carbon dioxide levels secondary to lactate.”

What’s more, when looking at a large managed care database, researchers found an association between panic disorder and coronary heart disease and this association remained even after controlling for covariates.

On the flip side, research published in 2017 also points out that “Anxiety and its associated disorders are common in patients with cardiovascular disease and may significantly influence cardiac health.” According to this paper:

It’s also important to realize that the symptoms of heart attack can vary from person to person and some may have very few symptoms, especially women. Importantly, research shows women are less likely to report chest pain when having a heart attack.

They’re also less likely to suspect their discomfort is related to a heart problem. Compared to just 11.8% of men, 20.9% of women attributed their chest pain to stress or anxiety. Women also tend to describe their pain differently. They’re more likely to use terms such as “pressure,” “tightness” or “discomfort” in the chest rather than referring to it as “chest pain.”

Approximately 29.5% of women had actually sought medical help before being hospitalized with a heart attack, compared to just 22.1% of men. What these findings suggest is that women and their doctors tend to misdiagnose or dismiss symptoms of heart attack, placing women at a higher risk of death than men. As noted by the authors:

“The presentation of AMI [acute myocardial infarction] symptoms was similar for young women and men, with chest pain as the predominant symptom for both sexes.

Women presented with a greater number of additional non-chest pain symptoms regardless of the presence of chest pain, and both women and their health care providers were less likely to attribute their prodromal symptoms to heart disease in comparison with men.”

Unfortunately, the absence of chest discomfort is a strong predictor of diagnosis and treatment delays. For this reason, it’s important to remember there are many other symptoms that might indicate a heart attack in progress, including the following:

When it comes to panic attacks, familiarizing yourself with the function of your fight-or-flight response can be helpful to guide you toward self-help strategies that work for your unique situation.

For example, contrary to popular belief, taking deep breaths can actually worsen a panic attack, as explained by Buteyko Breathing expert Patrick McKeown. A breathing exercise that can help quell anxiety and panic attacks is summarized below.

This sequence helps retain and gently accumulate carbon dioxide (CO2), leading to calmer breathing and reduced anxiety. In other words, the urge to breathe will decline as you go into a more relaxed state.

McKeown has also written a book specifically aimed at the treatment of anxiety through optimal breathing, called “Anxiety Free: Stop Worrying and Quieten Your Mind — Featuring the Buteyko Breathing Method and Mindfulness,” which can be found on Amazon.com.

In addition to the book, ButeykoClinic.com also offers a one-hour online course and an audio version of the book, along with accompanying videos.

EFT — A Long-Term Solution to Anxiety

Energy psychology techniques such as the Emotional Freedom Techniques (EFT) can also be very effective for anxiety and panic attacks. EFT is akin to acupuncture, which is based on the concept that a vital energy flows through your body along invisible pathways known as meridians.

EFT stimulates different energy meridian points in your body by tapping them with your fingertips, while simultaneously using custom-made verbal affirmations. This can be done alone or under the supervision of a qualified therapist. By doing so, you reprogram the way your body responds to emotional stressors.

EFT is particularly powerful for treating stress and anxiety because it specifically targets your amygdala and hippocampus, which are the parts of your brain that help you decide whether or not something is a threat. EFT has also been scientifically shown to lower cortisol levels, which are elevated when you’re stressed or anxious.

In the video above, EFT therapist Julie Schiffman demonstrates how to tap for panic attacks. Please keep in mind that while anyone can learn to do EFT at home, self-treatment for serious issues like persistent anxiety is not recommended. For serious or complex issues, you need someone to guide you through the process. That said, the more you tap, the more skilled you’ll become.

As for heart attacks, your best course of action is to take proactive measures to prevent them. According to a 2015 study, more than 70% of heart attacks could be prevented by implementing:

To this I would add maintaining a healthy iron level is important for your heart, as various studies show that both iron deficiency and iron overload can be a significant risk factor for heart attack.

As discussed in “Why Hard Water Decreases Heart Attacks,” magnesium insufficiency has also been implicated in heart attacks, so you want to make sure you’re getting enough magnesium from your diet and/or supplements. In “Could You Have a Heart Attack and Not Know It?” I also review some of the underlying issues that cause heart attacks, and additional steps you can take to lower your risk.