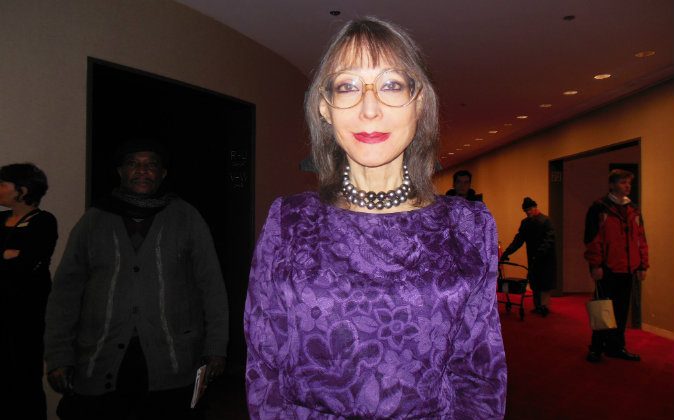 Gale Remington at a performance of Shen Yun at the David H. Koch Theater at Lincoln Center, on the evening of Sunday, Jan. 18, 2015. (Sherry Dong/Epoch Times)

NEW YORK—After seeing Shen Yun’s performance on Jan. 18, Gale Remington was moved by the classical Chinese dancing, the colorful costumes, the landscapes displayed on a digital backdrop, and the blend of Eastern and Western music in the live orchestra. “It’s like taking you into another world of purity and goodness that is active,” said Ms. Remington, a painter.

“The landscapes are magnificent, beautifully done, and the music is wonderful.”
— Gale Remington

“It shows the capacity of the Chinese to do things perfectly, exquisitely, with tradition and contemporariness,” Ms. Remington said. Shen Yun Performing Arts has a mission to revive 5,000 years of traditional Chinese culture, much of which has been lost under communist rule in China.

Since its inception in 2006 in New York, Shen Yun has become a global phenomenon, performing in over 100 cities in 20 countries each year. It displays ancient legends through story-based dance, but also scenes from contemporary China.

Ms. Remington said, “It’s also an effort to bring to people, through dance and the arts, the experience that … Falun Gong [practitioners] have when they meditate.” Shen Yun presents the story of Falun Dafa—adherents of which are currently being illegally imprisoned in China—in some of its dances.

Falun Dafa (also called Falun Gong) is an advanced self-cultivation practice of the Buddha school. The practice consists of five sets of gentle exercises and is based on the universal principles of truthfulness, compassion, and tolerance, according to the Falun Dafa website.

“It is a kind of a depth of experience that can be meditative, but here it is presented as art.”
— Gale Remington

“It is a kind of a depth of experience that can be meditative, but here it is presented as art,” Ms. Remington said.

“The performers are giving all of themselves in choreography and dances that are just a grand and joyous world,” said Ms. Remington. “No one else has quite that world—that vision!”

“The landscapes are magnificent, beautifully done, and the music is wonderful,” said Ms. Remington. “The orchestra is fabulous. It’s a great company.”

The music from Shen Yun’s orchestra is truly one of a kind. It combines the spirit, beauty, and distinctiveness of Chinese music with the precision, power, and grandeur of the Western symphony orchestra, according Shen Yun’s website. The result is two great traditions producing one refreshing sound.