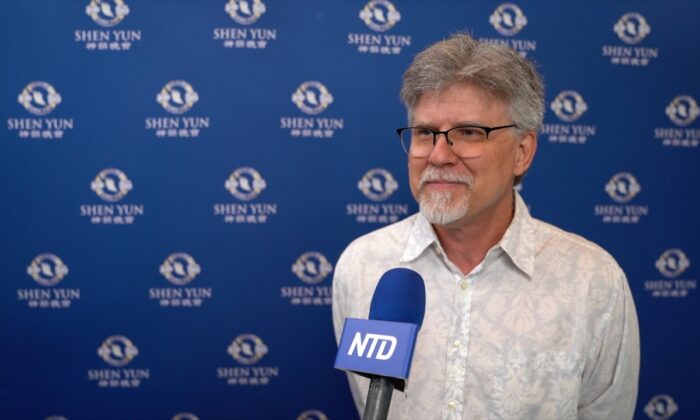 ST. PETERSBURG, Fla.—For 30 years, artist Jeff Walling has been painting lifelike murals and beautiful faux architectural details that trick the eye into believing it’s seeing stone ruins, three-dimensional objects, gorgeous marble, and more. But on Feb. 20, 2020, Walling’s artistic sensibilities came alive in a way they never had before as he watched Shen Yun Performing Arts at the Mahaffey Theater in St. Petersburg, Florida.

“Love [Shen Yun]! Loved it from the moment it came on, I was amazed!” Walling said. “It really was, the music is fantastic. I didn’t know it was going to be a live orchestra. So I loved that. But no, the performers were amazing. They’re blowing my mind, really are.”

“Well, the whole thing is artistic, from the color, from the dancing, the music. I mean everything about it. I think it’s just so well done. It’s blowing my mind, honestly. I’m really enjoying it,” he added. “It’s just so fluid. It has a peace to it. It’s not loud, stomping, it’s not R-rated or anything. It’s just beautiful. It is Godly, I think.”

Walling needed time after the performance to let everything sink in and let the exact inspiration he received rise to the surface. But right away he was curious to know more about the ethnic and folk dances from Mongolia and from ancient China’s dynasties.

“It definitely is something I’ll research more about the traditional Chinese dance and the different regions cause I care about those things, you know, those little details, what the individual pieces were about,” he said.

Shen Yun utilizes classical Chinese dance, an ancient and highly-expressive art form developed over thousands of years in China, in its quest to revive that ancient civilization and traditional culture.

Combined with couture costumes, a live orchestra with Eastern and Western instruments, digitally animated backdrops, and more, Shen Yun’s performance delights audiences from Los Angeles to Paris to Tokyo and has influenced the art world significantly.

Walling, the painter, agreed. “Absolutely, love it! Everything flows. Everything makes sense. It’s a full composition. You know, every dance, every—, every movement, the background, everything, love it. Very thoughtful.”

Like many, Walling wasn’t aware that the tumbling and flipping techniques now associated with gymnastics originated in classical Chinese dance.

“I didn’t know that all those acrobatic moves really came from China, too. So that was neat,” he said.

In reviving traditional Chinese culture, Shen Yun passes on reminders of the most essential aspect of that ancient civilization: its deeply spiritual beliefs such as Buddhism, Daoism, and Confucianism.

Walling said he absolutely loved this component of Shen Yun.

“I mean, I think that’s the original dance in this world came from reverence to God or a being or entity. So that’s where dance came from. So, of course, it makes sense,” he said, adding that the performance and its divine themes inspired him and made him feel good.

“Oh, I love it. Absolutely. Yeah. It needs to be over in China too. … It’s important to keep this going because, again, I didn’t know about it. And probably a lot of people didn’t know that this was an art form that’s been going on for a long time,” he said.

When Walling heard that Shen Yun cannot perform in China due to the Chinese Communist Party’s hostility toward traditional Chinese culture and people of faith, “it makes me very angry,” he said.

“So the whole thing is an emotional experience I guess. Because that’s frustrating. So subjugating a whole group of people that believe something that’s personal, you can’t stop people from doing that. I know they’re doing that to the Muslims over there, the Uyghurs. So yes, this is important. It’s very important, not just artistically, but socially, I think. Absolutely.”

To Shen Yun’s artists, Walling extended his gratitude and the hope to see them again.

“Just thank you!” he told them. “Yes, thank you for doing it. I know I can’t. The amount of work that goes into [your performance] is overwhelming. And, yes, just keep coming back. Keep doing it. Yes, absolutely! Thank you!”