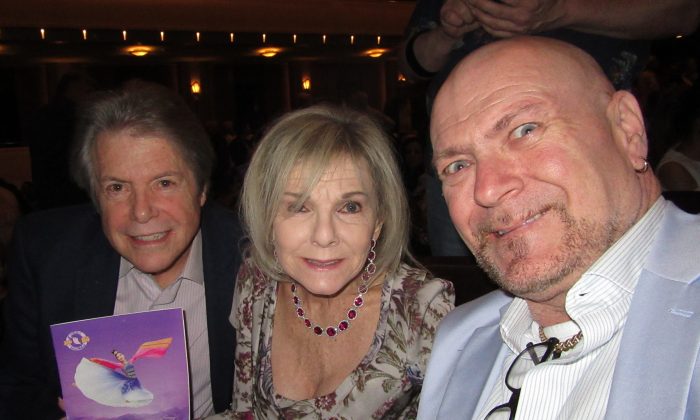 “Very good!” said Ravenhill. “I love the choreography. I love the way it’s synchronized. It’s a pleasure. It’s quite thrilling, energetic, there’s an electricity and energy which is very special.”

Ravenhill is the owner of The Liberace Mansion in Las Vegas, which is open for tours and events. He bought the property in 2013 and spent millions renovating the late musician’s former mansion to its original glory and turning it into a museum.

Ravenhill’s cousin Barbara Woollen and her husband Bruce run the Vignettes Art Center in the city, which includes the All Things Small dollhouse and miniature museum.

Shen Yun is the world’s premier Chinese dance and music performing arts company. Founded in New York in 2006, its mission is to revive the traditional culture of China and its 5,000 years of history.

Each performance features classical Chinese dance, with ethnic and story-based dances, a live orchestra with both Eastern and Western instruments, a patented interactive digital backdrop, vibrant costumes, and more.

“I love the color. I like the way the animation fits in with the stage and how you’re transported from the planet to the moon,” said Ravenhill about the background imagery.

Ravenhill also said the performance taught him a number of things about authentic Chinese culture, and he understood the effort that went into the production.

“From what I see it is a lot of work and the countless hours put into this, so the effort is magnificent,” he said.

Ravenhill congratulated the artists on a job well done.

“I enjoyed the integration of the multi-media aspects,” she said. “It’s beautiful, it’s a beautiful vision.”

She was especially moved by a dance vignette where a girl was persecuted and blinded for her faith. Such story-based pieces shown during the performance are based on true stories from China.

“That touched my heart very deeply. It made me very sad,” she said.

Her husband Bruce said the Shen Yun performance was “an incredible production.”

He also particularly enjoyed the animated backdrop and its interaction with the dancers on stage.

“[Shen Yun] is particularly interesting because of the way they are preserving the history of the culture. Often our cultures, I’m talking about our national cultures, are lost through the years, and one way to preserve it is through art, and to preserve it through dance of this type of performance is truly a special treat,” he said.

He said he believes that learning more about other cultures is very important for audience members.

“Knowledge of the world and its cultures and its political situation, which was described, I think it’s vital to the existence of the world,” he said.

“We’re very happy that this troupe is in Las Vegas, and helping show their art to our community,” added Woollen.

With reporting by Jana Li and Sarah Le.