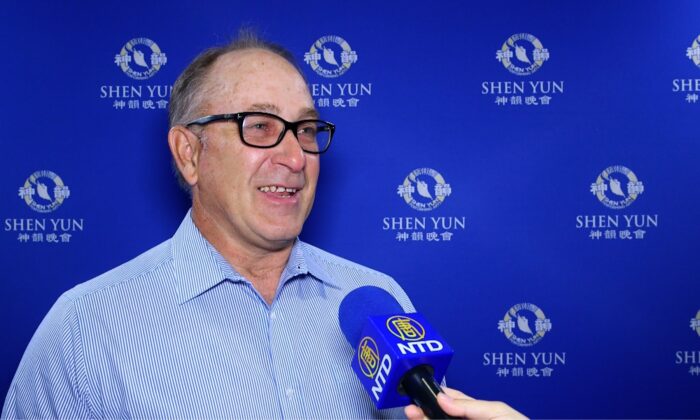 PHOENIX—In a world whose cultures seem to grow closer by the minute, a true increase in mutual understanding and common values remains rare. Tidbits and sound bites fly back and forth on social media, but they fail to provide an immersive, lived cultural experience that can be remembered for a lifetime. Perhaps that’s why so many appreciate Shen Yun Performing Arts, the New York-based classical Chinese dance company that is breathing new life into traditional Chinese culture and sharing that civilization’s profound principles and beliefs with the world.

“I love [Shen Yun]. This is, you know, there’re not many cultural things I get to go to and I love, I just love this,” said David Hale, an Arizona business owner who attended Shen Yun at the Phoenix Orpheum with his wife on March 6, 2020. “It’s just amazing.”

“I grew up in Idaho, which has no contact with any Chinese people at all. And it’s amazing to touch other cultures and see other things and understand what they believe and see what they do. And see the things that are similar and things that are different. I just—it’s like education. I enjoy that so much. I really, really do,” he added.

“My wife and I are here tonight,” Hale said. “It was a gift for our anniversary. So that’s why we’re here.”

“We’re watching them [the Shen Yun dancers] and they’re doing all the flips and the tosses and these beautiful things and … it’s just amazing, but, you know, you’re always thinking: ‘Can I do that?’ It’s like, no way,” he said with a laugh. “It’s beautiful and it’s gorgeous and it’s artistic.”

In addition to being one of Shen Yun’s newest fans, Hale owns a professional fire systems installation company, helping keep people safe from fires in the Phoenix area.

He’s also an a cappella singer, was part of a barbershop chorus, and has played in pop bands. His musical background gave him the ability to interpret Shen Yun’s original orchestral compositions from a unique perspective.

“I’ve enjoyed it a lot,” he began, referring to the blend of Eastern melodies and Western orchestration by the Shen Yun orchestra.

“I listen to that and I can hear it as it comes in and it’s nice to hear things that I don’t hear very much and it’s beautiful. It’s really is fun. It really complements the dance. So that’s been a lot of fun to hear and see.”

“You hear the tune in the tones and it’s like yin and yang. It’s a complement—it really complements the dance and what they’re doing and how they’re moving and all of the things that happen in the dance,” he said.

It’s lovely just to hear the music that goes along with that. Some traditional some, you know, some familiar.
— David Hale

“It’s lovely just to hear the music that goes along with that. Some traditional some, you know, some familiar, but it’s just, it’s lovely. So, just really enjoying it.”

Hale enjoyed the baritone of the evening, who performed a solo piece titled “Persecuted for Your Redemption,” about a spiritual discipline that is persecuted in China today, and the belief that this practice, like Buddhism and Daoism before it, is connected to heaven as well as to all mankind.

“It’s nice to hear, you know,” Hale said about the baritone’s song. “We don’t get to hear that; we don’t get to see that; it’s nice. I appreciate him making a statement, which is exactly what we all should do, is stand up for what we believe and do what we’re doing, right? And, you know, I love that kind of music as well as I enjoy just hearing people just singing from their heart and expressing themselves. So that’s very nice.”

In the song, as well as throughout the performance, Shen Yun’s artists carry on the traditional Chinese belief in the Creator, as well as the important role that divine beings play in life on earth.

“I believe that, too,” Hale said. “So that’s kind of cool to see it in from another perspective and from another culture to see what you believe.”

Lastly, Hale confirmed what many have said about Shen Yun, that it’s something the world needs right now.

“I believe that’s true,” he said. “Because, you know, the world is such chaos and craziness.”

Hale even had in mind a few people whom he thinks would benefit immensely from the beauty and structure it displays.

“It’s nice to see something that’s orderly, organized, beautiful, gorgeous. And just so well put together. It is just amazing. So I just, it is just something that we just need in our whole lives,” he said. “I work with 10 teenage boys in a group. And I thought, ‘I wish I could expose them to this.’ They wouldn’t probably appreciate it at all, but I wish I could just say ‘Guys, come on. There’s things out there besides what you see in high school.’ So it’d just be great.”