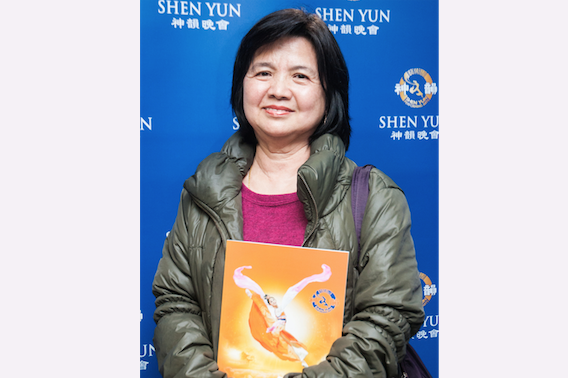 You Xueji currently serves as the Director-General of Civic Orchestra affiliated to Taipei Chinese Orchestra and Chinese orchestra conductor of several universities.

Based in New York, “the Shen Yun Orchestra masterfully blends two of the world’s greatest classical music traditions” according to the website.
As an experienced Chinese orchestra conductor and a piano teacher, Ms. You is familiar with both Chinese and Western musical instruments. She marveled at Shen Yun’s orchestra. “Combining the sounds of the Chinese erhu and the Western violin actually requires very special coordination. The tuning and frequency must match. Owing to the structures of the instruments, coordinating them is in fact quite difficult.”

She added, “When the Shen Yun orchestra is combined with the dancing, one can not only hear the music, but also see the music!”

Ms. You has visited eastern Tibet and Lhasa, listened to local traditional music and has performs some spiritual music. When she saw the Shen Yun, she was moved by the music. “Shen Yun’s music makes me feel that unity can be attained between heaven and mankind, which is a goal that we strive for,” she said.

The state of art digitally animated backdrops add an extra dimension to the dance performances, Ms. You was particularly impressed. She said excitedly, “The Shen Yun backdrop is flawlessly combined with the performance on stage … This is the first time I have seen this. It was quite a novelty!”

“Through the universal language of music and dance, Shen Yun weaves a wondrous tapestry of heavenly realms, ancient legends and modern heroic tales, taking you on a journey through 5000 years of Chinese culture. Its stunning beauty and tremendous energy leave audiences uplifted and inspired,” according to the website.

“The body language of the dancers was amazing, and the dancing was highly professional,” Ms.You said.

“The delivery of the music and the storyline were all very impressive … I saw their hard work, and I also saw the messages they were trying to portray. It was highly educational and is definitely worthy of continued promotion. I think this is a fantastic program!”

She added, “I understood the message that some of these programs were conveying, and they touched me deeply.”

The handmade original designs of the costumes also impressed Ms. You. “The matching of colors on the dancers’ costumes worked out wonderfully. I found it truly stunning!” she said.

“Shen Yun gives me a feeling of seeing something completely new. I think it is superb! If I have the opportunity, I will definitely come see it again year after year after.”
“Excellent! It was truly a superb show!

“The soprano is so impressive and admirable!”

Chao liked Jiang Min’s solo, “I don’t know how she does it. I have never heard notes that are so high and so powerful!”

She also liked how Shen Yun’s dances contained stories with meanings, depth, and culture. She hoped all the directors in CFL could help promote it.