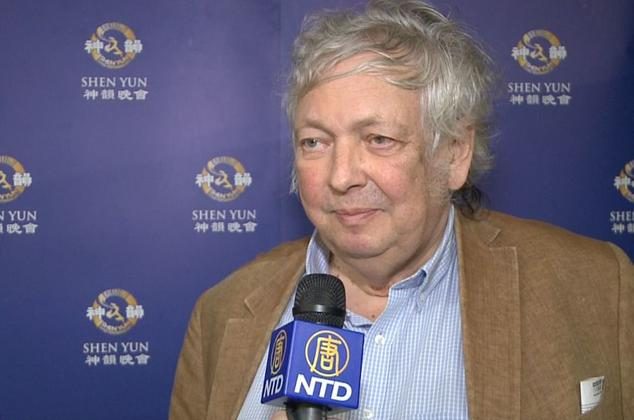 VIENNA—Dr. Peter Dusek, an opera critic and honorary professor of contemporary history and archive sciences at the University of Vienna, attended the closing performance of the Shen Yun Performing Arts on March 11, 2015. The venue was Vienna’s largest concert hall, the Wiener Stadthalle, which holds more than 350 events every year.

New York-based Shen Yun has appeared in Vienna for a number of years, and Dr. Peter Dusek remembers when he attended the Shen Yun in 2011 for the first time and again in 2014.

He said that this time, because he already had an inkling of what type of show he was going to see, he liked it even more: “It is a distinctly different world from what we are used to in modern times. It requires that one immerse oneself into what is happening on stage.”

He was amazed that the audience members “were not just of one age, but a cross section of all ages” and believes that Shen Yun is able to interest the younger crowd as well as the older folks because it contains something for all tastes.

For Dr. Dusek, the “modern pop culture destroys the cultural senses of young people, while Shen Yun revives it.”

He was impressed that Shen Yun brings to life for its audience myths and legends of the Middle Kingdom’s bygone eras through many different scenes and opens up the mind to the past.

He mused aloud, “Every scene is, because of technological innovation, accompanied by what Chinese provinces looked like centuries ago. It shows the nature, the mountains and thus, one does not forget what it was like in the past.”

Shen Yun uses a different digitally animated backdrop for each dance in the program.

In Dr. Dusek’s mind, the audience’s interest in Shen Yun arises because “ancient times are brought to the audience in a new format, a modern format. Yet, it contains the wonders of the past.”

According to Dr. Dusek, “One must not forget the past, but learn from the times when culture was at its height. One must let go of the influence of this materialistic world. The reason for living should not be viewed by how many shoes one has bought.”

Reporting by Alexander Hamrle and Heide B. Malhotra