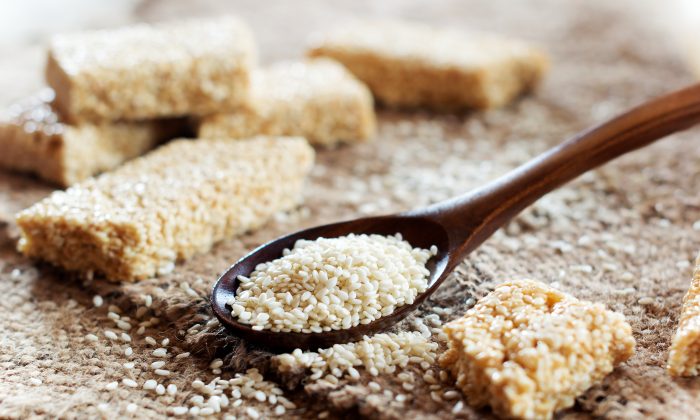 Given the growing body of scientific support on its health benefit, sesame would be just as at home in a medicine cabinet as it would be a kitchen cupboard.

Sesame (Sesamum indicum) is one of the oldest cultivated plants in the world, prized as an oilseed for at least 5,000 years.  While it is beginning to regain favor due to its exceptionally high calcium and magnesium content, few realize it is also one of the most potent medicinal foods still commonly consumed today.

Substitution of all dietary oils with sesame oil brought down systolic and dystolic blood pressure to normal.

In fact, its history as a medicine goes back 3600 years to Egyptian times where it was listed in the scrolls of the Ebers as a favored medicine.  Also, women in ancient Babylon were believed to use a mixture of honey and sesame seeds (havla) to prolong youth and beauty, and Roman soldiers ate the mixture for strength and energy.

In the past twenty years, a glut of scientific information has poured in demonstrating that sesame seed, and its components, have over three dozen documented therapeutic properties. Given these new revelations, it would seem that sesame would be just as at home in a medicine cabinet as it would be a kitchen cupboard.

Here Are Just 10 Evidence-Based Medicinal Properties of This Food-Medicine:

1.Diabetes: A study published in 2011 in the Clinical Journal of Nutrition showed that sesame oil improved the effectiveness of the oral antidiabetic drug glibenclamide in type 2 diabetic patients.   Another study published in 2006 in the Journal of Medicinal Foods showed that the substitution of sesame seed oil as the sole edible oil lowers blood pressure and glucose in hypertensive diabetics.

2. High Blood Pressure:  A study published in 2006 in the Yale Journal of Biological Medicineshowed that sesame seed oil has a beneficial effect in hypertensive patients on either diuretics or beta-blockers. Substitution of all dietary oils with sesame oil brought down systolic and dystolic  blood pressure to normal, in addition to decreasing lipid peroxidation (bodily rancidity) and antioxidant status.  One of the compounds identified behind sesame seed’s antihypertensive effects are peptides that act as angiotensin I-converting enzyme inhibitors.

3. Gingivitis/Dental Plaque: Sesame seed oil has been used for oral health for thousands of years in the traditional Indian medical tradition known as Ayurveda in a process known as “oil pulling.” It involves swishing sesame seed oil in the mouth for prolonged durations and has been said to prevent teeth decay, halitosis, bleeding gums, dry throat, and for strengthening the teeth, gums and jaw. Clinical research now confirms that it compares favorably to chemical mouthwash (chlorhexidine) in improving plaque-induced gingivitis, and that it is capable of reducing Streptococcus mutans growth associated with oral plaque formation.

4. Infant Health/Massage Oil:  A study published in the Indian Journal of Medical Research in 2000 showed that massaging infants with sesame oil improved both their growth and post-massage sleep, in comparison to control oils such as mineral oil.

5. Multiple Sclerosis (MS): In the animal model of MS, also known as experimental autoimmune encephalomyelitis, sesame seed oil protects mice from developing the disease by reducing IFN-gamma secretion, a key factor in initiating autoimmune inflammation and injury in the nervous system. It has also been research for its potential beneficial role in another neurodegenerative condition, Huntington’s disease.

7. Atherosclerosis: Sesame seed oil prevents the formation of atherosclerotic lesions in mice fed an atherogenic diet.  The antioxidant and anti-inflammatory lignan found within sesame seeds known as sesamol has been identified to be partially responsible for its anti-atherogenic properties. In fact, sesamol has been shown to possess over two dozen beneficial pharmacologically active properties, many of which may contribute to improving cardiovascular health.

8. Depression: The sesame lignin sesamol was shown to exert an antidepressant-like effect in behavioral despair in chronically stressed mice, specifically by modulating oxidative-nitrosative stress and inflammation.

9. Radiation-Induced DNA Damage: Sesamol has been shown to protect against gamma radiation-induced DNA damage, likely through its antioxidant properties.  It is capable of reducing mortality in radiation treated mice, in part through preventing intestinal and spleen damage.   When compared to another powerful antioxidant, melatonin, it was found 20 times more effective as a free radical scavenger.

10. Cancer: Sesame contains a fat-soluble lignin with phytoestrogenic properties known as sesamin, and which has been studied for inhibiting the proliferation of a wide range of cancer cells, including:

Sesamin’s anticancer effects have been linked to the NF-kappaB signaling.

Sesame deserves to be recognized, along with garlic, honey, turmeric and a select few other substances,  as an easily accessible and affordable food-medicine that, if consumed regularly, could quite possibly save lives.

*Image of “sweets” via Shutterstock