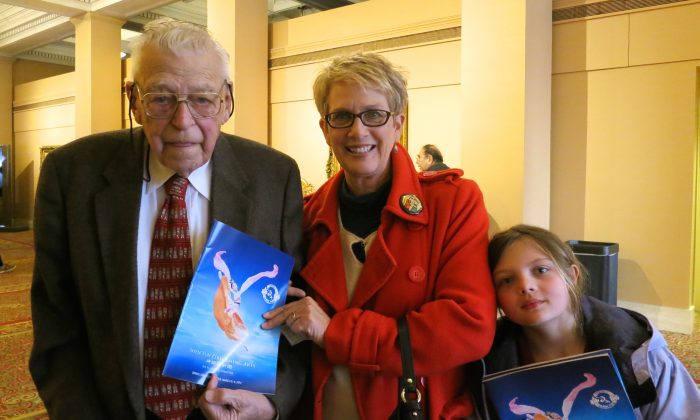 ‘One of the Best Ever’ Says Retired Omaha’s Impresario

OMAHA, Neb.—With “years of experience in show business and this is one of the best shows ever,” said 94 year old Dick Walter, who came with his family to Shen Yun Performing Arts at the Orpheum Theatre.

Mr. Walter’s should know as he was the Impresario for Omaha for years, bringing all the shows to the Orpheum.

“I presented all the shows here at Orpheum. … Shows played in New York or Chicago then came to me,” he said.

In his time, Mr. Walter brought in the shows and acts, hundreds of them including big name Broadway touring companies, stars, musicians, big band leaders, comedians, magicians, classical music, and the off-beat performances of the time.

“This is one of the best shows that has ever presented in this city, that I tell you,” Mr. Walter.

Mr. Walter described Shen Yun from his perspective as “a variety show, oriental variety show. … You have to see it to believe it,” is what he would say to his peers.

Shen Yun’s mission is take the audience on a journey of 5,000 years of traditional true Chinese culture through the performing arts. It does so with classical Chinese, folk and ethnic dance, orchestral music combining Eastern and Western traditional instruments, renown vocal soloists, and high-technology animated backdrops.

What impressed Mr. Walter was “the wonderful technique of connection in their dances. I mean they were wonderful. They didn’t do just solos; they did group dances, wonderful.”

Shen Yun peaked his curiosity about traditional Chinese culture. “I would like to know more about it.”

Grace, the youngest in the family to attend the performance with Mr. Walter had one word to describe her experience with Shen Yun: “It was awesome, that’s all I’m saying.”