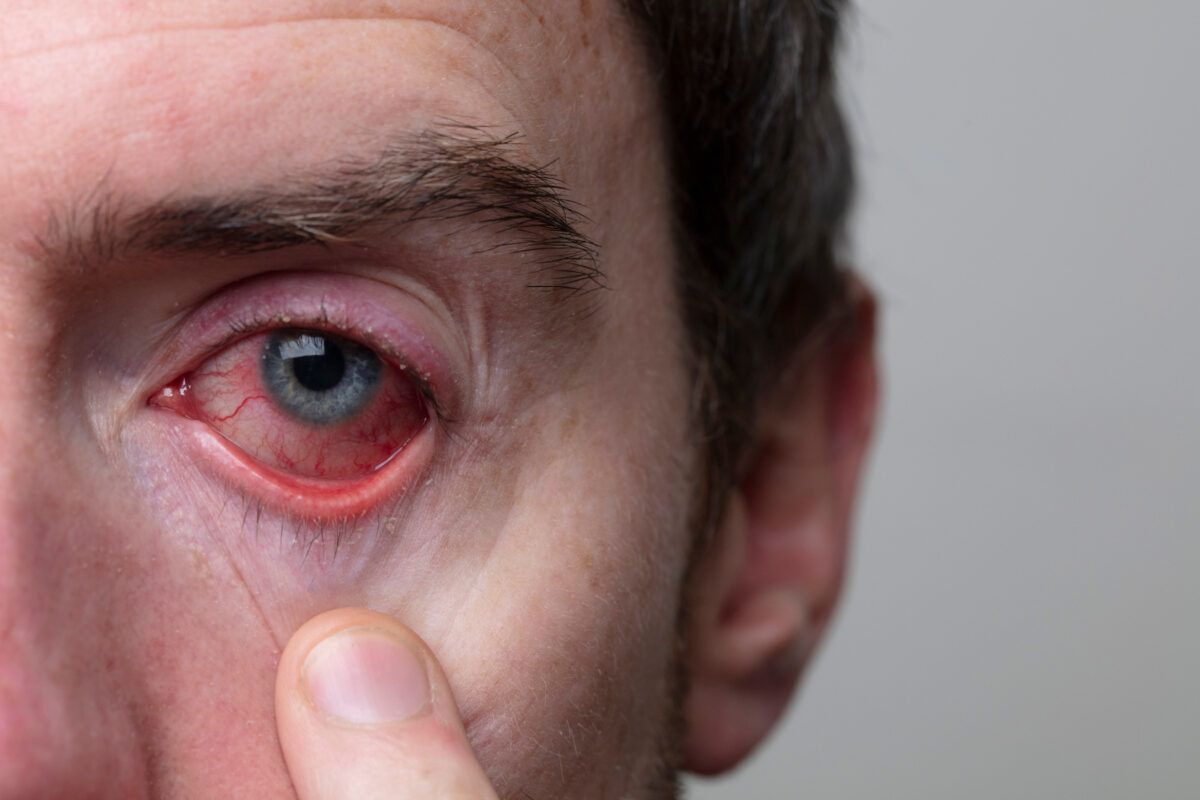 One in Three People Has This Eye Parasite

It can damage your vision, be harmful during pregnancy and may not initially cause symptoms. Take these steps to prevent infection, and greater care if you are pregnant.

Toxoplasma gondii is a parasite and responsible for the infection toxoplasmosis. A study[1] published in May 2022 found that the prevalence of eye infections caused by the parasite is common in Australian adults. The parasite is known to cause infection globally in a wide variety of birds, mammals and humans.

A parasite is a living organism that requires a host from which it gets its food and nutrients.[2] There are three classes of parasites that can affect humans, including protozoa, helminths and ectoparasites. Protozoans are one-celled organisms that multiply in humans and can develop into serious infections.

Helminths are multicelled organisms that can be seen by the naked eye in the adult stage. These include flatworms, thorny-headed worms and roundworms. Ectoparasites are blood-sucking arthropods such as ticks, lice, mites and fleas. According to the CDC,[3] malaria is globally responsible for more deaths than any other parasitic disease.

Most deaths from malaria occur in children living in sub-Saharan Africa. Yet, other parasitic infections are also found across the world. Doctors use several different types of testing to identify parasitic diseases, including a fecal sample, endoscopy or colonoscopy, blood tests and imaging studies to look for lesions.[4]

Parasitic diseases can be transmitted from animal to human or from human to human, or can be acquired from the environment.[5] Animal transmission may also happen when meat is infected and used for food, for example, cryptosporidium or trichinella found in cows or pigs. The featured study analyzed the prevalence of Toxoplasma gondii, a common parasite across the world.[6]

Toxoplasma gondii is a microscopic parasite that has been characterized as the “most successful parasite in the world today.”[7] This is the result of the parasite’s ability to infect nearly any mammal, bird or person across the world. And, because no known treatment will eradicate the parasite, the host will carry Toxoplasma for life.

Currently, there is no vaccine approved for use in animals[8] or humans[9] that can prevent infection. Experts have estimated[10] that the prevalence of Toxoplasma in humans can range from 10% of the world’s population to as high as 80%, depending on what country is being studied. Low seroprevalence has been demonstrated in northern Europe, North America, Southeast Asia and Africa between the Sahara Desert and Sudan.

Areas of the world with higher prevalence include central and southern Europe, Latin America and tropical African countries. The objective of the featured study[11] was to determine an estimate of the prevalence of Toxoplasma retinochoroiditis in Australia. Toxoplasma retinochoroiditis is a common clinical manifestation for which the epidemiology has not been widely reported.

The infection causes inflammation and permanent scarring of the retina, also called ocular toxoplasmosis.[12] The disease can cause recurrent uveitis characterized by necrotizing retinitis and pigmented scarring, with vasculitis and vitritis.[13]

Typically, the diagnosis is easily made by an ophthalmologist or optometrist. The featured study used blood testing for antibodies to confirm the diagnosis,[14] despite the high seroprevalence in the general population, which may make the test generally unproductive for diagnosis.[15]

The researchers used data from the cross-sectional, community-based Busselton Health Aging Study.[16] In the parent study, researchers wrote that Toxoplasma gondii had been identified as the “top neglected parasitic infection.”[17]

The objective was to determine the prevalence of the infection and determine the risk factors for the population. The results of the parent study found that 66% of the subjects were seropositive for IgG and IgM antibodies. The researchers also found that the older the participant the higher the likelihood they were infected. Prevalence increased from 44.4% in 18- to 34-year-olds to 81% in 75- to-84-year-olds.

The researchers in the featured study gathered data from retinal photographs taken after pupil dilation to assess the presence or absence of lesions known to be common with toxoplasmic retinochoroiditis. The researchers found an estimated 1 in 149 people, or 0.67%, showed the characteristic appearance of the lesions and had detectable serum levels that were consistent with the diagnosis.

Based on the prevalence found in the sample size, researchers concluded that efforts “to quantify and address risk factors for human infection with T. gondii are justified.”[18]

Ocular toxoplasmosis is the leading cause of uveitis worldwide and a common reason for vision loss after an intraocular infection.[19] Symptoms of the condition usually present by the time a person is 20 to 40 years old.

Typically, an ophthalmologist will see an area of necrotizing retinitis close to a pigmented chorioretinal scar. There also may be satellite lesions, inflammatory ocular high blood pressure or widespread vasculitis. Some people are asymptomatic, while others will complain of blurry vision, red eyes, floaters or pain.[20] Up to 24% of patients arrive at the eye doctor with 20/200 vision or worse.

The infection may remain inactive for periods of time and then reactivate on the border of old scars. Unfortunately, the recurrence rate could be as high as 79%, but while no known treatment eradicates the parasite, those who have undergone treatment for ocular toxoplasmosis have a significant reduction in recurrence.[21]

In many cases, the infection is self-limiting and may not require treatment. However, if vision is threatened, doctors may prescribe corticosteroids, sulfadiazine and pyrimethamine.[22] However, there is “substantial toxicity” with this treatment protocol.[23] One review of the literature[24] suggests that treatment with trimethoprim-sulfamethoxazole is just as effective with an improved safety profile and may help prevent a recurrence.

How Is Toxoplasma Gondii Passed?

Toxoplasmosis can infect nearly all warm-blooded animals. Yet, the American Veterinary Medical Association[25] points out that all cat species are the definitive host for the parasite. “This means that they are the only animals that pass oocysts, the environmentally resistant stage of the parasite, in their stool to infect other animal species (including people).”[26]

When cats prey on infected small animals, they become infected themselves. Indoor-only cats may get infected from eating uncooked meat scraps or raw meat. The cat develops cysts inside the tissue that become infected with Toxoplasma gondii. Initially, one cat can shed millions of oocysts in the stool exposing other animals and people to the parasite. This is a thick-walled stage in the lifecycle of the parasite.

After the initial period, most cats stop passing oocysts and can appear perfectly healthy. Other cats may develop symptoms of liver damage, pneumonia or other health conditions.

These oocysts can exist in the environment for long periods of time. When the feces of the cat are consumed by livestock, the parasites can migrate to the muscle and survive after the animal is slaughtered.[27] Humans can become infected by drinking contaminated water, eating infected meat, or eating fresh produce that contains oocysts.

While most people do not have symptoms after being infected with Toxoplasma gondii, an infection in the months before getting pregnant or early in pregnancy is especially concerning. According to the March of Dimes, toxoplasmosis can be passed to your unborn infant if you were infected within six months of getting pregnant.[28] This can cause preterm birth, stillbirth or a miscarriage.

The risk of being passed to the baby depends on when the mother was infected. The later in pregnancy that a woman is infected, the higher the likelihood the baby will also carry toxoplasmosis. Yet, earlier infections can lead to more serious problems, including brain, liver and eye damage.

According to the March of Dimes, “Up to 1 in 2 babies (50%) who are infected with toxoplasmosis during the pregnancy are born early (preterm).”[29] Up to 10% of babies who were infected during pregnancy can have symptoms that include a swollen liver and spleen, swollen lymph nodes, feeding problems, low birth weight or seizures.

Babies may also have neurological conditions such as hydrocephalus, microcephaly or macrocephaly. Hydrocephalus, also called fluid on the brain, occurs when there is too much cerebrospinal fluid placing pressure on the brain.

Macrocephaly is a large-sized head and microcephaly is smaller than normal head size. Newborns who are known to carry toxoplasmosis may also develop symptoms later in life, including intellectual or developmental disabilities, eye infections, vision problems, seizures or hearing loss.

Studies have also investigated some of the more common congenital infections that are known to cause neurodevelopmental disabilities, such as cerebral palsy. These infections go by the acronym TORCH — toxoplasmosis, rubella, cytomegalovirus and herpes simplex virus.[30]

After infection with toxoplasmosis, most adults do not have any symptoms. However, some people can have flu-like symptoms, such as a sore throat, swollen glands, aching muscles and a high temperature.[31] People with the condition will normally get better within 6 weeks on their own. You should see your physician if you begin to have changes to your eyesight, are pregnant, plan on getting pregnant, or have a weakened immune system.

Routine screening is not necessary but contact your doctor if you have symptoms. They can do a blood test to measure immunoglobulin G (IgG). If it is necessary to determine when you were infected, the doctor can order an immunoglobulin M (IgM) test. There are several steps that you can take to prevent toxoplasmosis.[32][33]

If you are at risk, you should take extra precautions to avoid an infection. These can include:

[2] Centers for Disease Control and Prevention, About Parasites

[3] Centers for Disease Control and Prevention, About Parasites

[4] Centers for Disease Control and Prevention, Diagnosis of Parasitic Diseases

[5] Centers for Disease Control and Prevention, Transmission of Parasitic Diseases

[21] The American Academy of Ophthalmology, April 2020