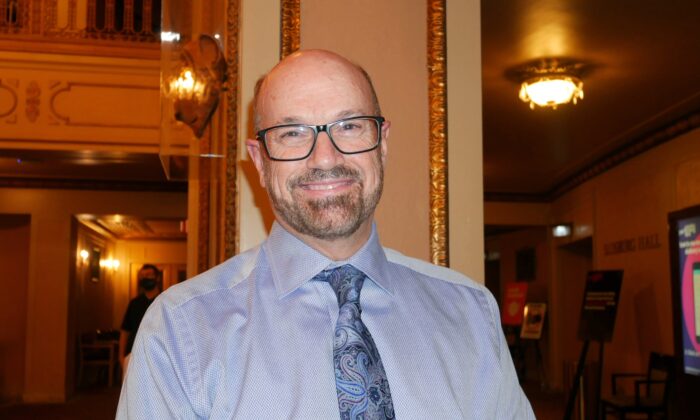 OMAHA, Neb.—John Mangiameli, holds very heartfelt opinions about life and the infallibility of death. Mangiameli, the owner of a hair salon, was enjoying Shen Yun Performing Arts at the Orpheum Theater.

He gave his views on the importance of not missing out on the chance to watch the world-renowned Chinese traditional dance and music company.

“It’s absolutely beautiful,” he said. Mangiameli believed that the pandemic should not stop people from getting out and enjoying life.

“And when the almighty integrator wants to take you, he is going to take you. And [do] not be so afraid to get out and enjoy what is out there to offer at this moment in time because you can’t get it back because tomorrow is history,” he said.

Mangiameli was amazed by the precision of the dancers and the beautiful costumes and said he felt very uplifted and energized after watching Shen Yun.

For Devan Cox, the chance to see Shen Yun was the outcome of a Shen Yun brochure found in the streets of a Japanese city that was picked up by his then 2-year old daughter. “And she carried it around for months,” said her father.

Then years later, Cox’s daughter, now 8-years old, saw a billboard in Omaha, North Dakota advertising Shen Yun and immediately knew what she had to do.

“And she said, I’ve always wanted to see [Shen Yun]. So now we are finally here,” said Cox who works in the calibration and precision measurement field.

Cox was eloquent in his praise of Shen Yun.

“It’s beautiful,” he said. ‘The Water Sleeves’ dance particularly captivated him with its beauty. It was also educational, he said.

With the pandemic, many people hesitate to leave their homes and especially to risk attending big events. But, Cox saw it differently.

“[The] pandemic doesn’t bother me. I wish we could take off our masks. But it was great. It’s wonderful to be here,” he said.

Through its mini-dramas which portray China’s spiritual and historic past, the dancers impart messages and teachings from great spiritual leaders and sages.

The overall message for Cox was about the importance of showing compassion.

“Compassion, I think in the end, is what really will bring all nations through. It’s a beautiful message,” he said.

Keith, Lodhia,  a neurosurgeon, had come to see Shen Yun with his extended family.

“It’s beautiful. There’s nothing like this that I’ve seen before,” said Lodhia, remarking on the subtlety of the dancers’ facial expressions.

Lodhia was touched by the symmetry of the dancers and the flowing movements. He was also very impressed by the athleticism and energy displayed by the male dancers.

“When [one talks] about the energy, there’s definitely this vibrant energy in this oneness. And I think it’s transcendent and certainly, we’re at this time in the pandemic when people are frankly tired of it. And [Shen Yun] gets us to forget about that and just to enjoy,” said Lodhia.

“All the performers seem to be dancing as one and in the moment.  And that energy. You could feel …  that harmony between the dancers …  and how seamless it looked,” he said.

“I think it’s very important to …  record history and to be able to pass that down to generations. And it’s really a shame to lose a beautiful part of Chinese culture,” he said.