Olympics May Be in Beijing, but ‘True China’ Found in Shen Yun 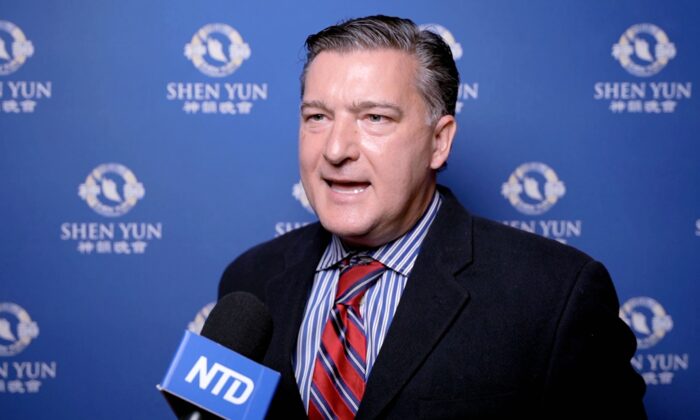 Alex Kuszewskiz at the Shen Yun performance at The State Theatre at Playhouse Square, in Cleveland, Ohio on the Feb. 5, 2022. (NTD)

CLEVELAND, Ohio—”It’s such a thrill to be able to experience the true China in Cleveland,” said Alex Kuszewski, a lawyer, who had just seen Shen Yun perform on Saturday afternoon.

“What a performance!” he said. “Very strong; very faith-filled. And I think it’s very interesting that with the Olympics going on in Beijing that the people that we are seeing in the sporting events would not be able to witness such a powerful performance by the very powerful actors in Cleveland today.”

Shen Yun is a classical Chinese dance and music company originating from upstate New York which is known best for its colorful and elegant portrayal of ancient China. Shen Yun has toured the world annually since 2006, wowing audiences with colorful costuming, creative storytelling, and inspiring tales rooted in faith in the divine. It is for this latter reason that Shen Yun, despite showing the glory of Chinese heritage, cannot be performed in today’s communist-controlled China.

What Kuszewski saw on stage was “the full history of the wealth, beauty, and freedom of where people want to be able to express themselves—and the drive for connecting with your creator.”

He added that the performance left him with “a great elevation of feeling.”

Traditionally, Chinese people saw themselves as descendants of the divine, and inheritors of a semi-divine culture. They credit their food, celebrations, and medicinal traditions to knowledge bestowed by gods, making every aspect of daily life connected in some way to a higher power. Shen Yun’s stories illustrate this little-known, or long-forgotten, characteristic of Chinese culture.

It was this that delighted Donna Rae Smith, founder of Bright Side, a behavioral strategy consulting company.

“I loved it! I loved it! I especially appreciated the spiritual essence of the dance performances,” she said. “I loved the fact that God our Creator was really center stage in the performance and so for that reason, I found it quite breath-taking.”

What’s really fascinating is that people don’t understand how oppressed of a nation China is.
— Donna Rae

Smith spent time in China and Tibet a number of years ago.

“What’s really fascinating is that people don’t understand how oppressed of a nation China is,” she said. “When I worked in China, there would be members of the Communist Party who would sit in on the meetings—and they weren’t participants; they were observers, and I thought that was most telling.”

Smith has a friend in the United States who escaped from persecution in China, like many of the performers in Shen Yun. Smith said their faith and goodness show in their work.

Sitting fairly close to the stage, she said she “was able to witness a wholeness that I have rarely experienced. There was total trust and unity among the dancers and their movement which means that that honesty was transcending an individual and it was among all of the dancers.”

Asked if she could describe the show in one word, Smith said, “truth.”

“If someone wants to experience truth, and beauty and spirituality, and be totally engaged by it transformed by it, mesmerized by it, inspired by it, come to this performance!”

Reporting by Michael Huang and NTD.