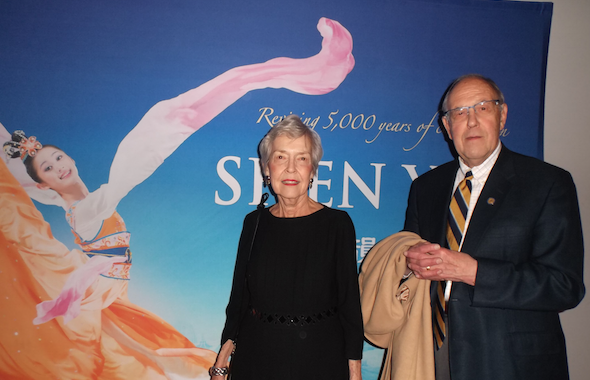 “I just was impressed [with] the sincerity and vigor of the group,” Mr. Ryan said about Shen Yun.

Mr. Ryan, who held a number of executive positions in different business before entering politics, said he was impressed by the excitement of the dancers and their skills.

“They were so passionate … they were very limber. They did a great job.”

According to the Shen Yun website, “Chinese dance is at the heart of what Shen Yun does. Known for its incredible flips and spins, and its gentle elegance, it is one of the most rigorous and expressive art forms in the world.”

Mrs. Ryan, who was an interior designer before retiring, said she also enjoyed the orchestra.

“I really loved the Chinese instruments,” she said, adding that she found the costumes used through the performance to be beautiful.

“[Chinese culture] was almost wiped out with that Cultural Revolution that Mao put in, you know it was terrible,” added Mrs. Ryan.