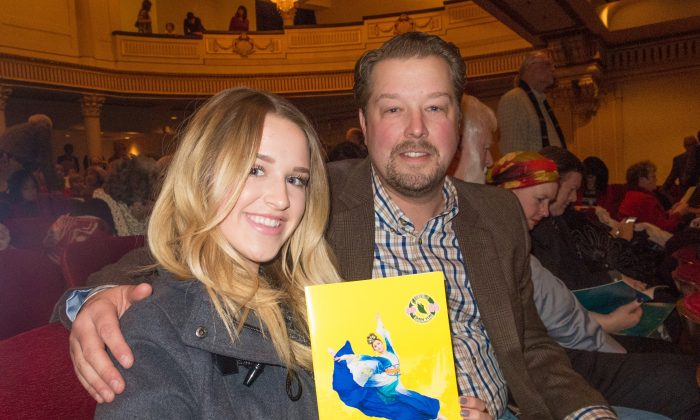 Mr. Geilmann, the Senior Vice President of an oil company, had the pleasure of seeing Shen Yun, a New York-based performing arts company, with his daughter after several years of wanting to attend.

Watching Shen Yun, he said, “you can tell how deep and how poignant Chinese culture is, and how disciplined it is.”

In particular, he noted the boundless faith and spirituality of the Shen Yun performers. “I think that China holds a reverence for life probably better than any other culture that we know of,” he said. The Chinese traditionally believed that Chinese culture is divinely inspired, a gift from the heavens. And Mr. Geilmann saw this reflected within the artistry of the Shen Yun performers.

“You can tell [the artists] long for and they revere things of beauty—things that god and divinity created,” Mr. Geilmann said.

In addition to discovering the rich cultural heritage of China’s history, Mr. Geilmann also came to understand the suppression of traditional Chinese culture in mainland China today. After seeing instances depicting how the Chinese Communist Party persecuted and oppressed spiritual beliefs, he realized the turmoil and destruction of traditional culture hidden behind China’s rapid and deceiving economic growth.

“Our perception over here is that China is just growing, and everybody loves the growth, and they love the change, and they love the government that’s over there. But evidently that’s not the case,” he said. Scenes of the persecution of ancient Chinese traditions and beliefs struck a chord within him, he said.

Hannah Geilmann, his daughter, shared his sentiments. She particularly liked the dance “Monks and the Red Guards,” which depicted Chinese Communist followers known as the Red Guard oppressing monks at a remote monastery. This story reflects what happened in China during the Cultural Revolution, a massive movement launched by the Chinese Communist Party to eradicate traditional Chinese beliefs by destroying temples, monasteries, monuments, ancient texts, and other relics of the past.

As a dancer herself, Ms. Geilmann also admired the extraordinary skill of the Shen Yun performers. “Their technique is absolutely astonishing!” she said.

She had wanted to see Shen Yun for many years after learning about it from her Chinese teacher in seventh grade and seeing commercials on television. Unfortunately, tickets were sold out. But this year when the two saw Shen Yun was coming again to Salt Lake City, Mr. Geilmann quickly went and bought tickets.

“We’d been wanting to come, and so far it has not disappointed,” Mr. Geilmann said. “It’s exquisite to watch.”