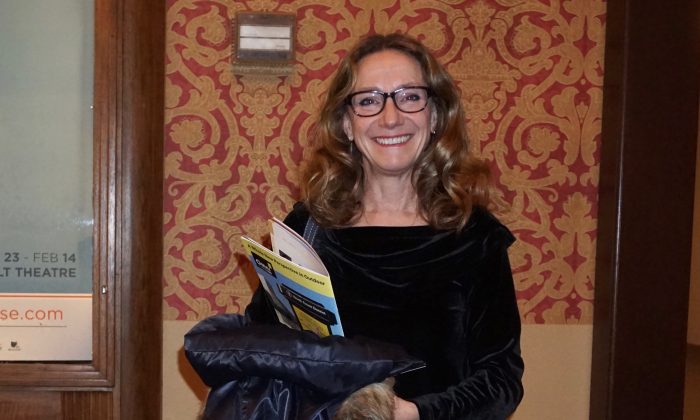 CLEVELAND—Cindy Hudson was impressed with Shen Yun Performing Arts because it had a lot more of a statement to it than she had anticipated. She attended the evening performance with her family at the State Theatre on Jan. 30.

She thought it was going to be only entertaining, and it was definitely entertaining,” but it also had a deeper message, a “spiritual message so it was a lot richer than I was expecting and that was a treat, really cool,” she said.

Ms. Hudson is an occupational therapist and also works as a minister at the Church of the Angels.

“Based in New York, Shen Yun Performing Arts was established by Falun Dafa practitioners in 2006. The company’s mission is to use performing arts to revive the essence of Chinese culture—traditionally considered a divinely inspired civilization,” according to Shen Yun’s website.

Falun Dafa is a peaceful meditation practice that focuses on the virtues of Truth, Compassion, and Tolerance. It has been brutally persecuted by the communist regime since 1999.

Through classical Chinese dance, a Shen Yun program consists of 20 or so mini-dramas that depict stories, legends, and myths spanning China’s 5,000 year history from ancient times to the present day. Several of these vignettes depict the ongoing persecution of Falun Dafa.

Ms. Hudson felt that it’s good for the message of the persecution to be publicized in this kind of venue because the upcoming generation doesn’t recognize or know what ancient China was about before the communist regime seized control and instituted the destruction of religions, of traditional culture, and freedom.

She absolutely felt there’s a place for a performance like Shen Yun on a Western stage because what stood out to her were several of the song lyrics that mentioned morality, which is a common thread among most traditional civilized cultures.

Hope for the future was something Ms. Hudson took away from the performance. She explained how human history is cyclical in the sense that everything from empires to civilizations, everything whether it’s good or bad, has its rise and fall, that the evil in the world will fall too, and that gives rise to new hope.

If she were to share one part of the performance with her colleagues and friends, it would be the message she took away from some of lyrics from the first song in the program: “‘Break free from the lies,’ that’s an important lesson for all of us,” she explained.