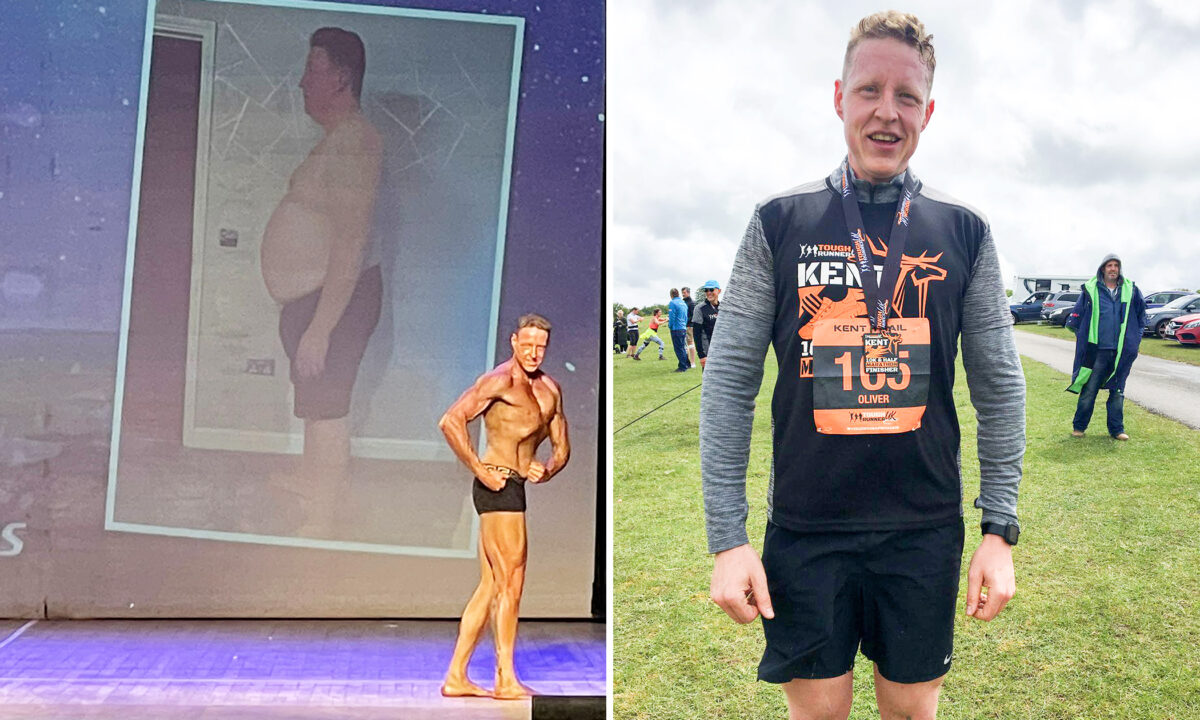 A man addicted to snacks has revealed how he lost over 154 pounds and won a bodybuilding award.

The construction worker from Faversham, Kent, in England, munched through sharer bags of crisps and biscuits until he decided enough was enough. Now, 23 months on, Oliver looks unrecognizable, weighing 210 pounds, and has won a Pure Elite bodybuilding award.

Oliver said: “On New Year’s Eve in 2019, I decided to get the scales out, which is something I’d never usually do.

“I’ve always been a big guy and used to get teased about it by mates and in school growing up, but never let it get to me.

“I’ve always wanted to have kids, and after weighing myself, realized that it probably wouldn’t be possible if I continued to put the weight on. At that point, I felt so heavy and was really worried about the possibility of diabetes and heart attacks.”

Oliver spent 280 pounds (approx. $375) per month on snacks such as cookies, energy drinks, and large bags of crisps.

“I’d be getting a meal deal from Morrisons and adding things on top like a six-pack of sausage rolls, which I’d eat before I even got back to work.

“I’d have a healthy dinner, but I’d go out after to the shop and get myself a share bag of crisps and eat three chocolate bars. I decided that I needed to start ditching the snacks and do something to help me lose the weight.”

Oliver started his weight loss journey by slowly reducing his daily calories, running, attending the gym, and speaking with nutritionists he found on social media.

“I lost weight really quickly at first and found myself losing seven pounds or more a week,” he said. “I realized that it was probably water weight and started to notice that progress started to slow. I measured my calves and waist on a weekly basis and had a strict routine where I’d get to the gym constantly.

“When lockdown hit, I didn’t want to change my regime, so bought some weights and carried on working out.

“But it got to a point where I just wasn’t seeing any progress anymore, so I ended up finding help from a nutritionist on Instagram called Tom Foreman and Aston Worsfold who do online coaching. We hit it off from the go, and the progressions and results I saw from them were amazing.

“I eat a lot of chicken and salmon now, as well as rice and other high carb foods, and will usually have a protein drink each day.”

Oliver now eats six times a day, as well as working out for an hour to 90 minutes at a time.

“I eat breakfast, lunch, dinner, and supper, as well as having a pre- and after-workout meal,” he said.

“I’ve reached a point where I’m happier with my weight and I’m trying to build muscle and keep everything tight.

“Because I regained that confidence through my nutritionist and working out, I entered the Pure Elite transformation category and couldn’t believe it when I won.

“Since losing the weight, I even ran the 4×4 challenge where you run four miles every four hours over a 48 hour period. I managed to raise over 1,200 pounds [approx. $1,600] for Mental Health UK, a charity close to my heart.”