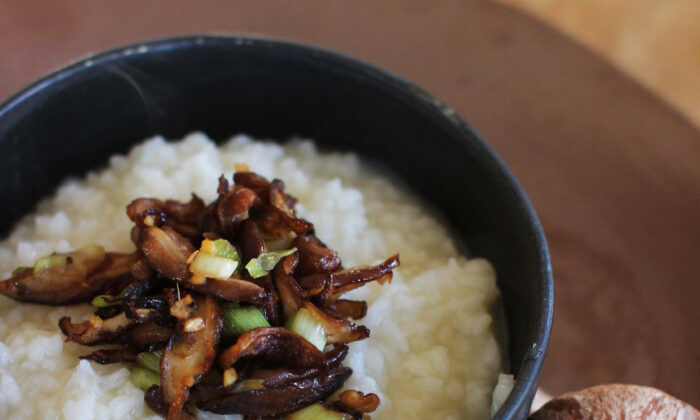 For millennia, Chinese people have relied on natural foods to strengthen immunity. This becomes especially necessary during the autumn, a drier season that’s known to trigger seasonal illnesses. Since ancient times, traditional Chinese medicine has offered us an excellent preventative—congee. Often known as rice porridge, congee is praised for its effectiveness in improving health, and has a reputation as the world’s best supplement.

A Special Porridge That Does Wonders

When one boils rice for congee, a translucent layer of thick liquid forms on top, producing the “soup” of the grain. Chinese people have long known this liquid can be effective for clearing coughs and restoring energy, along with many other benefits. On the uppermost layer of this soup is a thin sheet of “rice grease,” the essence of the congee.

According to traditional Chinese medicine studies, this substance is capable of improving energy circulation, nourishing the organs, and clearing internal blockages. In general terms, this is called replenishing the yin, or the vital essence, of the human body. Congee grease possesses yin-nourishing effects.

In the records of “The Collection of Compendium of Materia Medica” by Zhao Xuemin (1719–1805), congee grease also boasts cosmetic effects, smoothing one’s complexion and strengthening one’s physique. According to Zhao Xuemin, if a malnourished person eats congee grease, these effects will be evident within 100 days.

While its significant nutritional value and curative power are comparable to those of ginseng soup, congee’s readily accessible and budget-friendly ingredients have made it a more popular choice as a source of nourishment for thousands of years. According to the records of Wang Shixiong, a reputable Chinese physician of the 19th century (the Qing Dynasty), congee achieved miraculous health effects for the less-affluent families, who commonly used it as a substitute for ginseng soup.

The Chinese medical classic “Yellow Emperor’s Inner Canon” states that to maintain homeostasis, the human body depends on “five grains to nourish, five fruits to assist, five meats to tonify, and five vegetables to supplement.” Though all are needed, the most pivotal are the five grains, namely, millet, rice, soybean, wheat, and adzuki beans (red mung beans). They serve as the main fuel for the body, as they contain the carbohydrates and fiber needed to maintain healthy bodily functions.

Today, many young people believe they need to eat less rice in order to cut back on their starch intake since starch can cause weight gain or possibly even lead to diabetes. However, consuming grains can nourish and balance the inner organs and is necessary for keeping many illnesses away.

Ancient Chinese medicine studied the interconnectedness among the body’s mechanisms. It was understood that the lungs regulate the skin, the heart regulates the veins, the spleen regulates the muscles, the liver regulates the tendons, and the kidneys regulate the bones. To ensure the optimal functionality of all these elements, we must provide the nutrients needed by the respective organs.

This explains the cosmetic effects mentioned earlier. Congee boiled from white rice clears away dull-looking skin for a healthy, glowing complexion. According to ancient Chinese medicine, natural foods that are white in color benefit the lungs, thereby opening up the inner channels, unclogging and cleansing the pores, and freeing the skin from waste products while restoring the skin’s vigor.

You can also rejuvenate your hair with the frequent consumption of this thick rice soup. It is held that congee helps to deliver the nutrients necessary to the different parts of the hair, nourishing it and reducing hair loss and gray hair, while also adding a natural shine. A bowl of well-made congee truly does wonders. In addition to its ability to detoxify and nourish, it can even cure illnesses.

Traditional Chinese medicine maintains that an unsettled stomach disrupts quality rest. Any stomach discomfort negatively impacts one’s sleep quality and may even lead to insomnia. This can be resolved with a special kind of congee.

Job’s tears, also known as adlay millet, is incredible for clearing internal heat and smoothing one’s complexion, while the lotus seed can replenish the spleen and stomach. Lotus seed has a pleasant, light sweetness, and its “cool” property invigorates the spleen and thus prevents diarrhea, while mung bean detoxifies and clears away internal disturbances. Combining these three into a congee recipe can calm the nerves, improve energy circulation, moisturize skin, and help clear edema.

Pork tenderloin is often used for stir-frying, as it possesses a delightful balance of fragrance, crispness, and taste. But the real magic comes when you shred it and cook it with congee. This recipe is especially soothing for those with a loss of appetite. Years ago, a family member who had been combating cancer for a long time, threw up everything he ate. One day a friend of his made him pork tenderloin congee, as it was something delicious while still easy to consume. “This is the most soothing meal I’ve had in a long while,” the patient said.

Seemingly ordinary yet extremely beneficial, congee is indeed a low-profile treasure passed down from ancient times. With the busy modern life we lead today, it might be hard to take the time to boil the perfect congee, but it can be done very simply: Start cooking the night before, and then keep it overnight in a thermal cooker. By the next morning, a nutritious, tasty pot of congee will be ready for the entire family.

Dr. Hu’s Health Corner, translated and edited for clarity with permission of NTD.

Currently, a professor at Nine Star University of Health and Sciences in Sunnyvale, Calif., Dr. Hu Naiwen was previously a pharmacological researcher of Western medicine in Taiwan. He was also the director of traditional Chinese medicine clubs at a number of Taiwanese universities. This article was originally published by Elite Lifestyle Magazine.