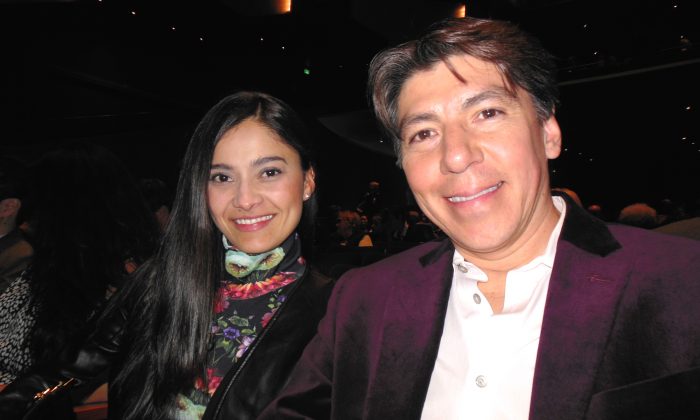 SEATTLE—”Wow, I was in awe,” said Jaime Mendez. “I was speechless.”

Shen Yun Performing Arts returned to Seattle’s Marion Oliver McCaw Hall on April 3 for its 2015 run, and Mr. Mendez, an anchor for Univision Seattle, said that at the very first curtain, there was the “message of love, of harmony—there is a message of connection with nature.”

“The curtain opens, I see a lot of different colors that are very well combined,” he said. “It’s very bright.”

Through music, dance, and stories portraying China’s 5,000 years of divine culture, Shen Yun seeks to revitalize a culture that was once nearly lost at the hands of the communist regime.

Mr. Mendez was especially struck by Shen Yun’s one-of-a-kind live orchestral music, which combines East and West like no other can.

“The music is just wonderful,” he said. “It’s beautiful—it’s hypnotizing and to me it’s very exotic.”

He added that the entire performance created some very unique emotions that permeated from his heart. “I just felt sentimental in some of these pieces, like I almost wanted to cry—and I don’t cry a lot,” he said.

Mr. Mendez also noted how the performance’s inner meanings brought up some ineffable feelings, notably toward his family. “I felt like I started having memories of when I was a kid,” he said. “I wanna see my brother and tell him how much I love him.”

“And I think when you put your heart into something so beautiful like this, with so many messages, I think it’s got to do something to you,” he said. “You have to have a heart of rock if you’re not touched by something liked this.”

Messages From the Divine

His wife Diana Arias, a therapist, said that Shen Yun contains the power to do tremendous things. “I think it’s very powerful—the combination between the image, between the music and the dancing.”

She noted that the spiritual aspects of the performance “touched my soul.”

The spiritual aspects of Shen Yun are especially important, as they exemplify China’s history as typified through its practices of Taoism, Buddhism, and Confucianism. Such practices are centered on compassion between human beings, an aspect of which Ms. Arias picked out.

“I think we can start from the point that the show points out the compassion,” she said. “Also, the peaceful soul and how we can help others even when they are not our friends or when they are not related to us as family, as friendly people. So that was powerful for me.”

Overall, Mr. Mendez noted how the divine portions of the performance really stood out to him. ” I see a lot of different landscapes and divinity,” he said.

But he especially noted how Shen Yun embodies the meaning of humanity and how we can “accomplish the mission we have on this Earth.”

“Be in harmony with the rest of the world and nature,” he concluded, summarizing his experience with Shen Yun. “And I think that’s how you get fulfilled inside.”