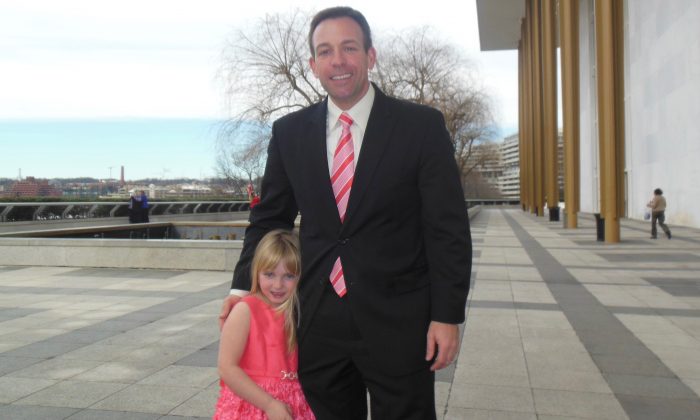 WASHINGTON—Local news anchor Adam Longo and his young daughter Luci were excited to see 5,000 years of Chinese civilization come alive at the Kennedy Center Opera House on Feb. 20. Luci loves dance and choreography, “Kung Fu Panda,” and was sure to benefit from a cultural experience.

During intermission at the Shen Yun Performing Arts matinee, the father and daughter pair found it to be both fun and educational.

“I think it is fantastic,” said Mr. Longo, a reporter and anchor at CBS affiliate WUSA9 TV. “I think the direction of the orchestra, the music is spectacular, I enjoy the choreography and the dancing very much.”

Through classical Chinese dance, audience members experienced joy and mirth, heartbreak and tragedy, and even anger or divine inspiration through the facial and body movements of the dance, which told various stories.

“They really help you get in touch with the emotions of the moment and what they are trying to portray,” he said.

The expressive performance had been a discovery in culture, as Mr. Longo described. Through classical Chinese dance and an orchestra blending East and West, New York-based Shen Yun’s artists had portrayed the characters of a China once nearly lost.

It was such a departure from the modern perspective of China for Mr. Longo. People have a tendency to think of China as the communist China under the current regime, and he appreciated seeing the other side, the “hidden cultures” of the country that haven’t been widely discussed.

“It is good to see that they are still on display for everyone to see,” Mr. Longo said.