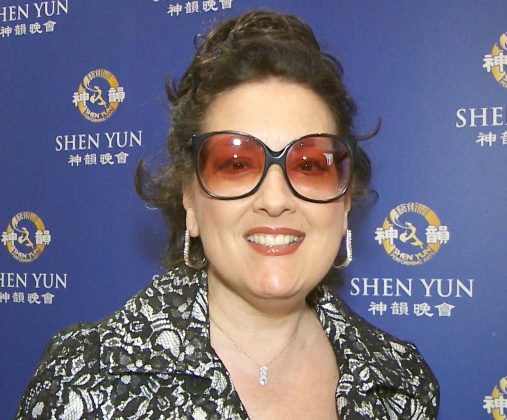 In the audience for the April 25 show was David H. Koch himself, the man for whom the theater at Lincoln Center is named. Mr. Koch said that Shen Yun was “inspirational” and he loved the classical Chinese dances.

Shen Yun, which means “the beauty of heavenly beings dancing,” takes inspiration from China’s 5,000 years of civilization, which has been nearly destroyed under Chinese communist rule. Values such as compassion and loyalty, kindness and bravery, lie at the heart of traditional Chinese culture.

Debuting in New York in 2006, Shen Yun has grown into an international success story, attracting acclaim wherever it goes.

“I hear people saying that Chinese culture is divine culture. After today, I believe it. It is divine,” added Ms. Hamdach.

Shen Yun has three equally large companies that visit over 100 cities throughout Europe, Asia, Oceania, and North America. Audiences are greeted with an entirely new performance each year.

Cristina Fontanelli, an opera singer and television personality, said the performance “makes me feel so warmhearted towards the Chinese people, because it is universal.”

Soloists That ‘Filled the Theater’

Classically trained soprano Elisa Brown, said the voices of the two Shen Yun sopranos and the tenor “filled the theater and made your body resonate.”

A solo erhu performance by Xiaochun Qi was particularly notable for Ms. Brown. An erhu is a two-stringed Chinese instrument with a haunting sound often referred to as a Chinese violin.

“I was overwhelmed,” Ms. Brown said. “My entire body was trembling—but in a very loving way, I felt very joyful. It was just really spectacular.”

Ms. Brown said she felt Shen Yun is “bringing back the spirituality, the respect, and the kindness towards one another.”

“This is a show of great beauty and it lifts up humanity,” said Ms. Fontanelli.

Audience member Krystle Kelley, an international model, was struck by the Shen Yun performers’ beauty. She said that she would enthusiastically recommend the show to her friends.

New York-based Shen Yun Performing Arts has three touring companies that perform simultaneously around the world. The next performances in the northeastern United States are in Philadelphia May 3-5. For more information, visit ShenYunPerformingArts.org