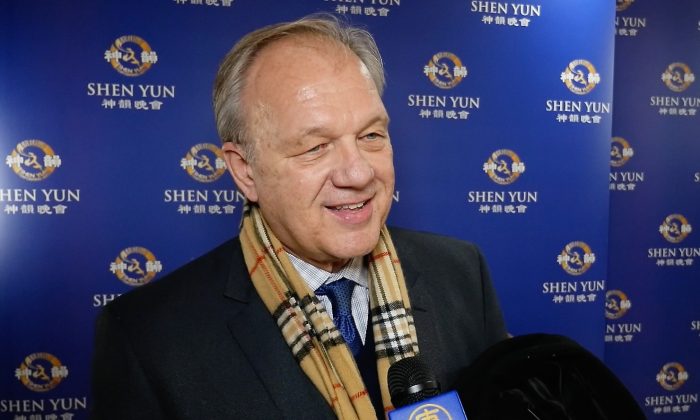 NEW YORK—It was as if the instruments spoke to the very deepest part of his soul and his peace was stirred by the two-stringed erhu.

Mr. Eaton is a composer and a conductor who has served as the music director of the New York City Symphony for 30 years. He’s entertained the world with his arrangements from South America to Russia and everywhere in between. He’s conducted concerts in so many New York venues that it would take an entire story to list, but this year, when he returned to the Lincoln Center, he wasn’t going to lead the orchestra in one of his tunes—Mr. Eaton was discovering Shen Yun Performing Arts.

“I thought it was fabulous, wonderful,” he said after the evening performance on Jan. 14, 2015. “Highly recommended.”

Shen Yun’s mission is to revive 5,000 years of traditional Chinese culture through the universal languages of music and dance. The New-York-based company has been touring the world with its one-of-a-kind orchestra since 2006. The Shen Yun Symphony Orchestra is unique in that it combines a Western symphony orchestra with traditional Chinese instruments.

“I think that the bringing together of the Eastern and Western elements is very effective. Very effective. I enjoyed it so much,” Mr. Eaton said. Classical Chinese instruments like the two-stringed erhu move into the spotlight on the stage when soloist Xiaochun Qi envelops the entire theater and the audience calms to pin-drop silence.

Mr. Eaton was also very impressed with how the orchestra was completely in synch with the dancers on stage. This is something Shen Yun is able to do by selecting award-winning dancers trained in classical Chinese dance fundamentals.

It’s not a coincidence that the Chinese word for medicine is derived from the word for music.

“Many Western artists, Bach, Beethoven, also believed that music was a way to connect to God,” Mr. Eaton said.

Mr. Eaton, who is from New Jersey, has already made plans to see Shen Yun again at the NJ Pac in Newark in April.

“I’m going to tell my friends, my colleagues, my family to come again,” he said.