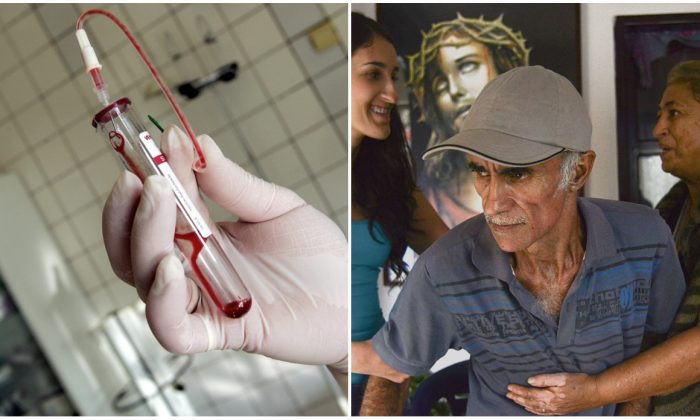 (L) A nurse holding a test-tube with HIV positive blood in an infectious diseases hospital in Moscow. (Maxim Marmur/AFP/Getty Images) (R) An Alzheimer patient (C) is helped by relatives at their house in Yarumal, north of Antioquia department, Colombia on Dec. 3, 2014. (Raul Arboleda)
Health

Scientists have long known that a certain protein marker is produced in the body as brain cells die. Current procedures to detect the biomarker involve tapping the spine to access cerebrospinal fluid, which is invasive and expensive.

Now, the authors of a new study say they have figured out a way to measure the fluid protein biomarker by testing blood.

“We know Alzheimer’s disease starts [in the brain] one or two decades before you have any symptoms,” said Prof Mathias Jucker, a co-author of the study from the German Center for Neurodegenerative Diseases in Tübingen, according to The Guardian. “We also know any therapy has to interfere 10 years [before symptoms] or even earlier to be successful if you want to target the cause of Alzheimer’s disease.”

Jucker said the blood test, which is simpler and cheaper than current detection procedures, could help patients through routine screenings for degenerative brain conditions in clinics. The new test would also allow researchers to test whether any medications that patients are taking are having an effect.

Another author of the study, titled “Serum neurofilament dynamics predicts neurodegeneration and clinical progression in presymptomatic Alzheimer’s disease,” said researchers have been able to detect the biomarker well over a decade before any symptoms appeared.

“Sixteen years before symptoms arise is really quite early in the disease process, but we were able to see differences even then,” co-author Stephanie Schultz, a graduate student at Washington University, said, according to the Daily Mail. “This could be a good preclinical biomarker to identify those who will go on to develop clinical symptoms.”

The team was led by Washington University School of Medicine in St. Louis, Missouri, according to the report.

Dr. Brian Gordon from Washington University School of Medicine was cited by the Independent as saying that the new blood test “is something that would be easy to incorporate into a screening test in a neurology clinic.”

“We validated it in people with Alzheimer’s disease because we know their brains undergo lots of neurodegeneration,” Dr. Gorden added, “but this marker isn’t specific for Alzheimer’s. High levels could be a sign of many different neurological diseases and injuries.”

The test could also be used to identify people with other forms of brain damage, such as those caused by a stroke or traumatic injury.

No Cure for Alzheimer’s

People who suffer from Alzheimer’s often experience a decline in memory, thinking, and reasoning skills.

There is no cure for Alzheimer’s but drugs are available that temper its impact and slow some of the debilitating symptoms, such as the decline in memory.

The Alzheimer’s Association says there are 10 symptoms of the disease, including disruptive memory loss, challenges in planning or solving problems, difficulty in completing familiar tasks, confusion with time and place, as well as misplacing things.

The Association predicts that by 2050, the number of people living with the disease in the United States is estimated to rise to almost 14 million, and the costs of Alzheimer’s to the nation will grow from the current $277 billion to as much as $1.1 trillion.

“Every 65 seconds someone in the United States develops the disease,” the Association states.

Medical teams elsewhere have been engaged in similar research, and are keen to begin testing new technologies in Alzheimer’s detection and care. Scientists at UNT Health Science Center in Fort Worth have created a blood test and are looking for trial participants, according to NBC.

“I am very excited about this study. I spent a large portion of my life trying to make this happen and I think we are almost there,” said Dr. Sid O’Bryant, Professor of Pharmacology and Neuroscience.

“Primary care doctors are overwhelmed with patients worried about their memory problems, yet they don’t have a tool. There is no tool for them to say ‘you’re okay,’ or ‘you need a follow,’ so having a blood test they can run as part of their normal routine is really going to change the practice for those doctors and patients.”

The study is expected to take three years and will examine screening accuracy and effectiveness in older patients, according to NBC.

Dr. O’Bryant told reporters that if the test is proven to be effective, it could be a breakthrough in early diagnosis of Alzheimer’s disease.

“A large number of patients can be told, ‘stop doctor shopping, you don’t need any more tests.’ For those who it does look like there’s something, there are resources, ways we can help the families, medications,” he said, according to the report.