‘Never Saw Anything Like This When I Was in China,’ Says Shen Yun Audience Member 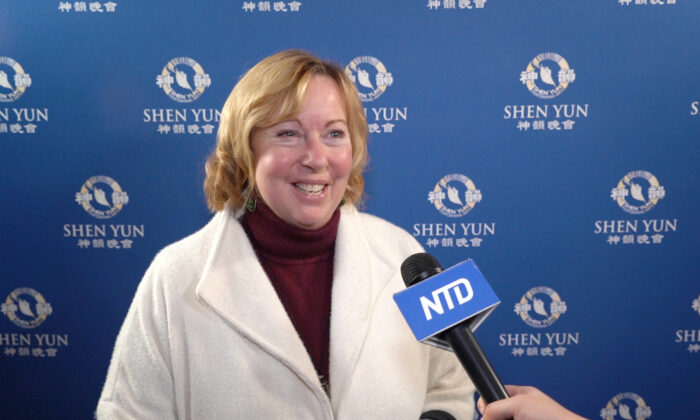 PHILADELPHIA, Pa.—If anyone attended a live performance in China, chances are they wouldn’t have seen anything like what Shen Yun Performing Arts puts on the stage. Not only is Shen Yun trying to revive the lost culture of China since the communist regime took power, but the company is unable to perform in China.

I’m glad that they’re here to show us what Chinese traditional culture is all about.
— Tracy Jentzsch

“I’ve been to China before and I have never seen anything like this when I was [there]. So I think it was amazing and I’m glad that they’re here to show us what Chinese traditional culture is all about,” said Tracy Jentzsch, an administrator at the University of Delaware.

“I think that’s wonderful. I think many people in the world don’t know about traditional Chinese culture,” she said.

New York-based Shen Yun has been warmly welcomed at the Merriam Theater every season they tour.

“It was just really amazing. We’ve waited for five years to see this production so we were really happy to learn that it was in Philadelphia,” Jentzsch said.

Shen Yun was conceived in 2006 by artists around the world who had the joint dream of presenting the beauty of China’s 5,000 years of civilization to the world. Since then, Shen Yun has grown from one to seven companies that tour the world simultaneously.

One aspect of the performance that struck her was the stories about how history impacts our future.

She expressed that “the stories about past lives and reincarnation and about finding a place within one’s soul to really live out your dreams [is] what a lot of the performers were trying to show us.”

“It was amazing. It was breathtaking, it was beautiful, the dancers, everything was timed so perfectly and the music just took our breath away,” said Jentzsch.

“We really loved all of it. The music was really moving for me, but I also loved the dance with the plum fairies, the women with the flowers and that was just so beautiful. The costumes and the dancing and the acrobatics, it was just amazing,” she added.

Many spectators think that the tumbling techniques displayed by Shen Yun‘s artists come from gymnastics or acrobatics, but these techniques actually all originate from classical Chinese dance.