‘Never have I seen anything this well produced,’ Says TV and Movie Veteran 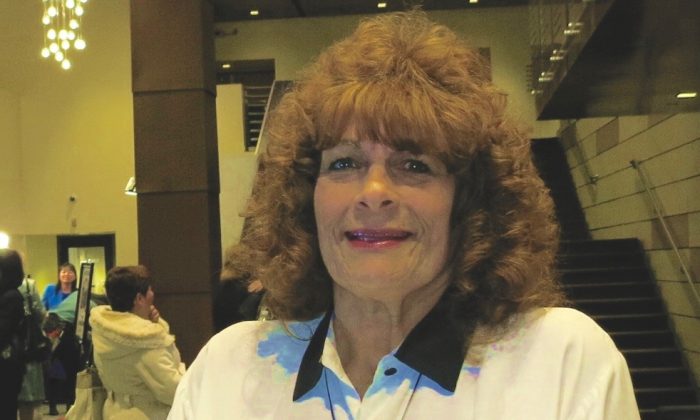 Pamela Davis after seeing Shen Yun Performing Arts at The Fred Kavli Theatre in Thousand Oaks on the evening of March 22, 2016. (Courtesy of NTD Television)

THOUSAND OAKS, Calif.—Pamela Davis has spent half her life in the TV and movie industry, working on series and films in casting, pre- and post-production, writing, and so on. But she said she had never, in all her career, seen anything like Shen Yun Performing Arts.

“It was absolutely fantastic, spectacular,” she said of the New York-based classical Chinese dance company on March 22. “Never have I seen anything this well produced. It was just unbelievable.”

The dancers and digital backdrop were picture perfect, the singing was magnificent and unique: a baritone and a soprano singing with the traditional bel canto technique, in Chinese. And through it all there were universal themes she connected to.

“I loved it, I loved all of it. I mean, there was a big message in it for me,” she said. “It’s how you’re going to live your life. And that if you live it well, you will go to heaven.”

One of the aspects that sparked this deep reflection was an erhu solo. The two-stringed instrument, thousands of years old, can be used to evoke a wide range of sounds—birds, horses, the human voice—and emotions.

“Oh, I’ve never seen or didn’t even know that there was an instrument with two strings and you could get that much music out of it. That really got me. That was absolutely stunning how she did that, and the piano player [accompanying] was perfect too,” Ms. Davis said.

She is the type of person to look for perfection, and everything about the Shen Yun production was perfect.

“There was not one flaw in the whole entire play that I could see,” she said. “It was just so entertaining and there were funny parts and there were sad parts. And whoever the writer is, is a brilliant, brilliant writer as far as I’m concerned.”

The stories Shen Yun tells—through authentic classical Chinese dance and an accompanying orchestra that blends the music of East and West—seem to cover the span of 5,000 years. The audience is dropped into the Qing Dynasty court one moment, witnessing Manchurian princesses who somehow maintain their grace and elegance atop highly elevated “flower pot” shoes. Minutes later, they’re whisked away to the Mongolian grasslands in a quick-stepping ethnic dance. The “Monkey King and the Dragon Palace” draws laughs from audience members both young and old.

The company’s mission, according to the program notes, is to revive the authentic traditional Chinese culture, which is believed to be divinely inspired.

“I thought it was just gorgeous. So much talent,” she said. “I’ve never, ever seen anything like this before.”