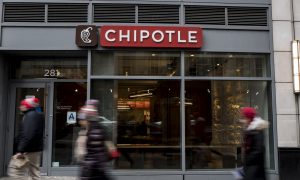 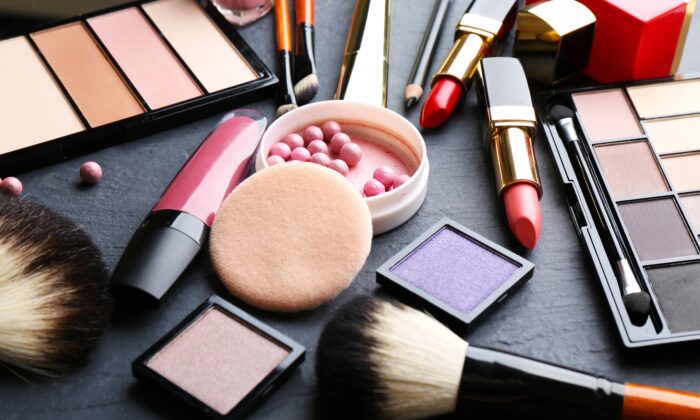 The forever chemical fluorine was found in an alarming amount of everyday cosmetics from popular stores. (Africa Studio/Shutterstock)
Mind & Body

Nearly Half of US Cosmetics Contain This Toxic Chemical

Cosmetics and personal care products have often tested positive for toxic chemicals. Now, a new study conducted by researchers at the University of Notre Dame has found that more than half of common U.S. cosmetics tested contain high levels of industrial compounds associated with various health conditions, including cancer.

One chemical found in an “alarming” number of products from popular stores such as Target, Ulta, Sephora, and Bed, Bath and Beyond was fluorine, which is part of the alphabet soup known as perfluorinated chemicals, historically abbreviated as PFC. Perfluorinated chemicals include perfluorocarbons and other per- and polyfluoroalkyl substances, collectively known as PFAS, but also referred to as PFOA and PFOS.

PFAS are sometimes referred to as “the Teflon chemicals” or “forever chemicals” since they do not break down in the environment. They are used by manufacturers to make products water-, oil-, grease- and stain-resistant. They are also found in firefighting foam.

According to the National Institute of Environmental Health Sciences, there are more than 4,700 PFAS chemicals in existence and the number continues to rise as the industry invents new forms. Prompted by pressure from the Food and Drug Administration (FDA), DuPont and 3M voluntarily phased out two of the thousands of PFAS chemicals, PFOS and PFOA, in the early 2000s.

While these two chemicals are no longer manufactured in the United States, documentation from the FDA reveals that “phased out” doesn’t necessarily mean “not being used” anywhere. In fact, there are limited ongoing uses of PFOS, and the U.S. Environmental Protection Agency (EPA) says:

“Although PFOA and PFOS are no longer manufactured in the United States, they are still produced internationally and can be imported into the United States in consumer goods such as carpet, leather and apparel, textiles, paper and packaging, coatings, rubber, and plastics.”

This means that although the manufacture of these toxic chemicals may have stopped in the United States, they still can arrive back in the country via products made elsewhere. And, when it comes to cosmetics, the three-year study at Notre Dame, published in Environmental Science & Technology Letters, clearly indicates that the problem of PFAS chemicals in makeup is an ongoing issue, including a lack of labeling.

‘Forever Chemicals’ Found in Nearly Half of Cosmetics Tested

To assess the potential environmental burden of PFAS in makeup, researchers from the university purchased 231 cosmetic products in eight categories commonly purchased throughout the United States and Canada. The categories included lip, eye, face, and eyebrow products and foundations, mascaras, and concealers.

The researchers purchased cosmetics from stores in Indiana and Michigan and tested them for fluorine. Although the ingredients lists didn’t show PFAS by name, the scientists found that a number of products had precursors of the harmful chemicals in them, including fluorine:

Many of the products that tested positive were also labeled “long-lasting” or “wear-resistant.” The researchers didn’t name the specific cosmetic companies, instead calling the issue “widespread.”

Fluorine is a PFAS chemical that contaminates the water supply and can bioaccumulate in the body. The researchers also found that the products tested positive for alcohol, methacrylate, and phosphate esters that are precursors to PFAs, also known to be harmful to human health.

The presence and amount of these chemicals was concerning. Just as important was the revelation that only one of the products tested listed PFAS chemicals on the ingredient label. Graham Peaslee was the principal investigator. He told a journalist from The Washington Post:

“We were shocked to see how much is in some of these products. … There’s no way for an average consumer to read a label and understand what’s in the product they just purchased. They can’t trust the label and that can be fixed.”

In June 2021, Sens. Susan Collins (R-Maine) and Richard Blumenthal (D-Conn.) introduced a bipartisan bill that would require the FDA to ban all PFAS chemicals in cosmetic products. The bill is called the No PFAS in Cosmetics Act. Collins and Blumenthal believe that “Americans should be able to trust that the products they are applying to their hair or skin are safe.”

The act is intended to direct the FDA to issue a rule that bans the intentional addition of PFAS in cosmetics. Scott Faber, senior vice president of government affairs for the Environmental Working Group (EWG) said in a press release from Collins:

Collins has introduced other legislation in the past alongside Sen. Dianne Feinstein (D-Calif.). Together, they have championed the Personal Care Products Safety Act, which was introduced in the Senate over four terms.

The act was a sweeping bill written to reform the regulation of personal care products and empower the FDA to review ingredients. The FDA would have been given authority to inspect factories and records and to require recalls of dangerous products. Cosmetic companies would also have been charged with providing $20.6 million annually in fee revenue.

The first time it was introduced in the House in 2013–2014, Rep. Janice Schakowsky (D-Ill.), sponsored the legislation. The most recent reintroduction to Congress was during the 2019–2020 term. In each term, the bill was defeated.

The new No PFAS in Cosmetics Act has a more finite mandate to ban a specific chemical in cosmetic products. Without the added fee structure and additional power given to the FDA in past legislation, this may be the inroad needed to start protecting consumers.

Janet Nudelman, director of the Breast Cancer Prevention Partners’ Campaign for Safe Cosmetics, said, “It is beyond outrageous that PFAS chemicals that are contaminating our drinking water and threatening human health because of their links to breast and other cancers, reproductive harm, and endocrine disruption are hiding in the beauty and personal care products women use every day.”

Unfortunately, one common belief is that if a product is released on the market and sold to the public it must be safe. In 2020, 33 scientists signed a consensus statement to plead with lawmakers to take “swift action to reduce exposure” to plastics in food packaging. In it, they included 1,200 peer-reviewed studies to support their statement. One of those plastics is PFAS.

Nearly 10 years ago there were 6,000 authorized chemicals that could be used in food packaging. Jane Muncke of the Food Packaging Forum, and one of the consensus statement contributors, states that the latest number is nearly 12,000.

The Environmental Defense Fund has written about the FDA process that led to the acceptance of plastics in contact with food. They have clarified a few misconceptions:

These dangers are also reaching your drinking water. The EWG commissioned a test in dozens of U.S. cities which showed contamination had been dramatically underestimated. EWG scientists believe the family of PFAS chemicals may be “detectable in all major water supplies in the U.S., almost certainly in all that use surface water.”

“EWG’s tests also found chemicals from the PFAS family that are not commonly tested for in drinking water,” they wrote.

A collaboration between Consumer Reports and The Guardian analyzed the water supply of 120 people who volunteered to send in water samples from around the United States. The group represented a cross-section of each of the EPA’s 10 jurisdictional regions. The analysis showed that of the 120 water samples, 118 had high levels of PFAS or arsenic, as well as detectable levels of lead.

According to the report from Consumer Reports, filtration systems exist that can clean the contaminants, and yet, “they are not being uniformly used by community water systems.”

An analysis published by the EWG showed there were 2,337 sites in 49 states with known PFAS contamination. Unfortunately, while evidence continues to mount demonstrating forever chemicals are hazardous, the EPA is unwilling to protect consumer health. According to the EWG: “[The EPA] recently released a so-called PFAS action plan, but it is woefully inadequate. The EPA plan will not address ongoing sources of PFAS pollution, will not clean up legacy pollution, and will not even require reporting of toxic PFAS releases.”

In one study published in Environmental Science & Technology, researchers analyzed PFAS in a group of breastfeeding women in the United States. The data were gathered from a cross-section of socioeconomically and geographically diverse groups of women and yet showed PFAS contamination in all samples.

The samples showed levels ranging from 50 parts per trillion (ppt) to more than 1,850 ppt in women’s breast milk. Even though there are no set standards for breast milk yet, as a comparison, the Environmental Working Group advises a target for drinking water at 1 ppt and the Agency for Toxic Substances and Disease Registry (ATSDR) recommends 14 ppt for PFOS (a component of PFAS) in children’s drinking water.

Evaluating the effects on infants is difficult. Dr. Sheela Sathyanarayana, a co-author of the study and pediatrician with the University of Washington, told a reporter from The Guardian that studies in older children and adults have shown these chemicals damage the immune system and create hormonal disruption. This is particularly problematic for infants as their immune system is not yet mature.

Evidence from the study also suggested the challenge with PFAS bioaccumulating in people is getting worse. As reported in The Guardian, when data from the current study were compared to one spearheaded by the EWG in 2005, the researchers found there was an increase in the amount of new-generation PFAS in breastmilk.

How to Avoid Toxic PFAS Chemicals

In May 2015, more than 200 scientists from 40 countries signed another consensus statement called the Madrid Statement. The scientists warned about the potential harmful effects of PFAS, including associations with liver toxicity, adverse neurobehavioral effects, hypothyroidism, and obesity.

Pretreated or stain-repellant treatments: Opt out of treatments on clothing, furniture, and carpeting. Clothing advertised as “breathable” is typically treated with polytetrafluoroethylene, a synthetic fluoropolymer.

Fast food and carry out foods: The containers are typically treated.

Microwave popcorn: PFAS may be present in the inner coating of the bag and may migrate to the oil from the packaging during heating. Instead, use “old-fashioned” stovetop non-GMO popcorn.

Nonstick cookware and other treated kitchen utensils: Healthier options include ceramic and enameled cast iron cookware, both of which are durable, easy to clean, and completely inert, which means they won’t release any harmful chemicals into your home.

Unfiltered tap water: Unfortunately, your choices are limited when it comes to avoiding PFAS in drinking water. Either you must filter your water or get water from a clean source. Although you may think that opting for bottled water is safe, it’s important to realize that PFAS are not regulated in bottled water, so there’s absolutely no guarantee that it’ll be free of these or other chemicals.

Bottled water also increases your risk of exposure to hazardous plastic chemicals such as bisphenol A, which has its own set of health risks. Most common water filters available in supermarkets will not remove PFASs. You really need a high-quality carbon filtration system.